Artemis Resources has been granted the key Armada prospect tenement in the emerging Paterson Range copper-gold province in the eastern Pilbara region of WA that surrounds Greatland Gold’s spectacular new Havieron discovery on three sides. The company recently outlined multiple exploration targets on the tenement from a geophysical interpretation of a high-resolution, aeromagnetic survey. 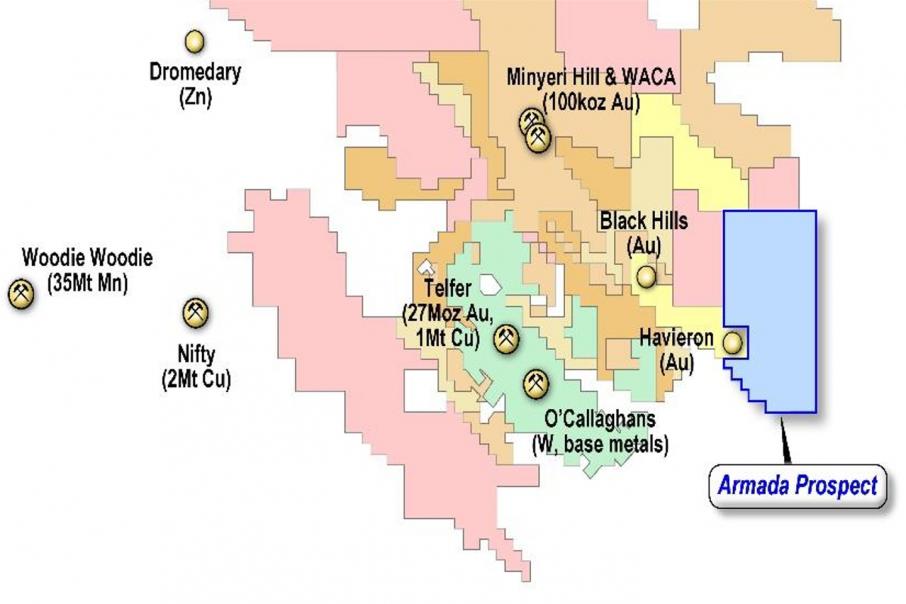 A key part of the Paterson Range jigsaw puzzle of tenements fell into place this week, with Artemis Resources saying that its 605 square kilometre licence covering the exciting Armada prospect had been granted.

The company will be keen to get on the ground, having recently delineated multiple aeromagnetic anomalies that abut and surround UK-listed Greatland Gold’s spectacular new deep Havieron copper-gold discovery on three sides.

Hence, Artemis’ great hope that it can cash in on the nearology of these company-making drilling results in its newly granted Armada tenement.

Company Executive Director Ed Mead said: “After identifying this copper-gold opportunity in mid-2018, Artemis has moved quickly to consolidate historic and newly acquired data as a precursor to a ground programme. The interest in this region is high and Artemis is now reviewing a range of options to advance Armada during 2019.”

Artemis outlined the magnetic exploration targets last month from the geophysical interpretation of a low level, high-resolution, aeromagnetic survey flown over the western corridor of the Armada prospect, adjacent to Greatland’s Havieron discovery.

The survey was undertaken in November last year and produced eight high value targets that lie within a 20km radius of Havieron.

Two of the exploration targets identified at Armada, lie in a 6km long corridor, directly along strike and north of Havieron.

The Kzinti target is centred only 3km from Havieron and is a strongly magnetic unit about 1km long.

The 1.5km long Bolian target is 6km north of Havieron and sits on an intriguing geological flexure, with some apparent thickening or circular zonation of the magnetic feature, not unlike Havieron.

The remaining exploration targets were identified both north and south of Greatland’s key discovery in the Paterson Range.

According to management, the gravity survey work could also outline further anomalies that currently have no magnetic signature at all.

Artemis’ Armada prospect lies 40km east of the Newcrest’s mammoth Telfer gold mine that has produced over 27 million ounces of gold and 1 million tonnes of copper to date.

Greatland Gold said that the alteration and mineralisation drill tested at its Havieron project displays similarities to the major iron oxide-copper-gold, or “IOCG”, deposits at Olympic Dam in South Australia and the revered Ernest Henry mine in western Queensland.

Artemis management believes that its Armada prospect may also be prospective for IOCG-style deposits, which has been backed up by the discovery of eight compelling new magnetic targets on its tenement package, so close to Havieron.