Hot Chili has started its maiden RC drilling campaign at the large Cortadera copper-gold porphyry deposit located adjacent to its flagship Productora project in central Chile. The company said that drilling was progressing well, with all drill holes recording visual intersections of copper oxide and copper sulphide mineralisation. The first batch of samples have been dispatched for analysis and assays are expected in the coming weeks. 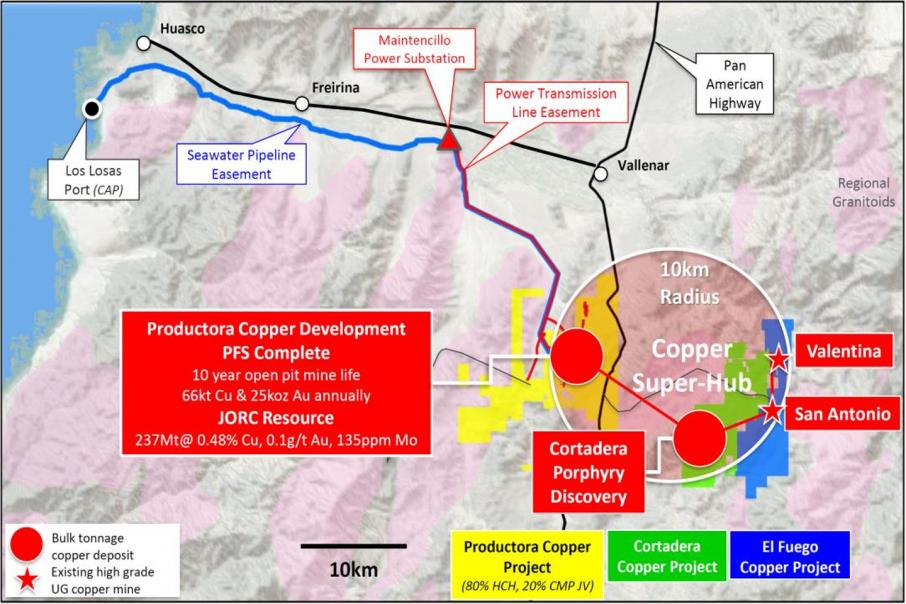 The company has initially programmed 17 deep holes at Cortadera for about 5,000 metres and has already completed the first five holes.

According to Hot Chili, the drilling is progressing well, with all holes drilled to date recording visual intersections of copper oxide and copper sulphide mineralisation.

The first batch of samples has been dispatched for analysis, with assay results expected in the coming weeks.

Drilling is targeting three separate porphyry bodies identified at Cortadera to confirm and extend areas of known surface enrichment and test wide, high-grade, copper-gold mineralisation not closed off in the past.

Cortadera is a real hidden gem, with extraordinary widths of deep-seated copper-gold porphyry mineralisation only released publicly in the last few months.

Early in February, Hot Chili secured the option to acquire the Cortadera copper-gold discovery and the smaller Purisima mining right along strike, both of which contain wide, consistent intersections of copper-gold mineralisation from over 23,000 metres of diamond drilling.

The acquisitions generate an opportunity for Hot Chili to develop the Productora, Cortadera and nearby high-grade satellite El Fuego deposits concurrently, utilising a central processing facility and hence potentially create a substantial integrated copper mining hub in this region of Chile.

The company’s strategy is transparent, with Hot Chili aiming for a long tenancy in Chile, potentially doubling the mine life of the Productora project to at least 20 years, with the addition of Cortadera and the previously drilled El Fuego satellite deposits.

Results from the company’s current drilling program at Cortadera and future funding initiatives to underpin a significant integrated copper mining operation in this region of Chile will become key catalysts for Hot Chili’s operational goals in the upcoming period.

The acquisition of Cortadera has the potential to completely transform and rerate Hot Chili’s fortunes in South America as it seeks to become the next significant global copper producer.