Hot Chili’s recently commenced 40,000-metre drilling campaign across its Costa Fuego project in northern Chile has posted an uber-impressive 382 metre copper intercept at its Cortadera porphyry deposit, which includes 80m at 0.6 per cent copper and 0.2 grams per tonne gold from 524m down-hole. The company already has two rigs running 24-7 and is set to add a third in the coming weeks. 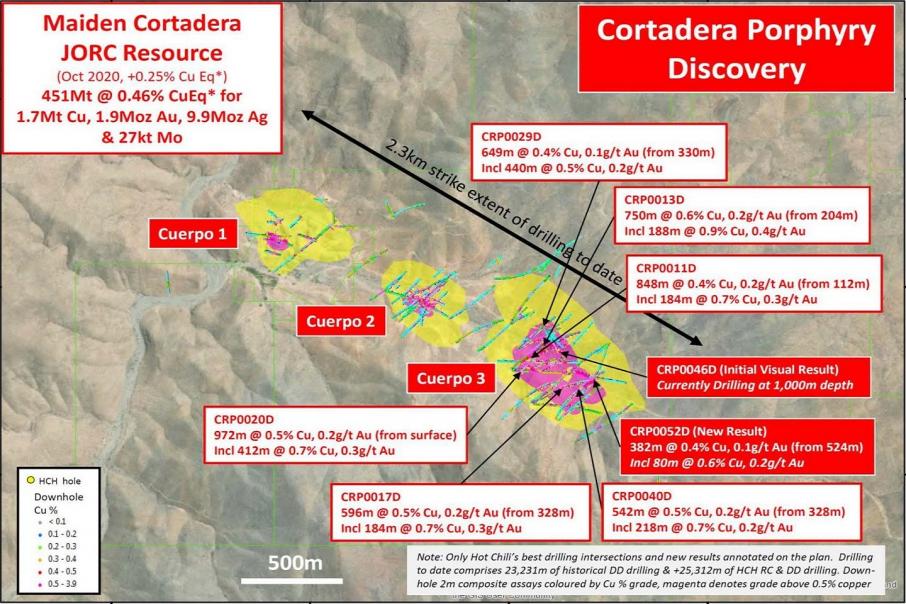 Hot Chili’s recently commenced 40,000-metre drilling campaign across its Costa Fuego project in northern Chile has posted an uber-impressive 382 metre copper intercept at its Cortadera porphyry deposit which gradees 0.4 per cent copper and includes 80m at 0.6 per cent copper and 0.2 grams per tonne gold from 524m down-hole.

The results add to a wealth of broad intercepts produced from diamond drilling under the Cortadera porphyry deposit, which include the headline-grabbing intersection recorded a year ago nearly one kilometre long.

Recently, it would appear the company has quietly continued its drilling program over the traditional Christmas break, with two rigs running around the clock which are now set to be joined by a third in the coming weeks. Hot Chili is already hinting at a flow of results in the coming weeks with its current drill hole, CRP0046D, having intersected more the 750m of porphyry mineralisation as the drill bit heads to a target depth of 1,200m.

The company says that its primary focus for the coming year will be the expansion of the high-grade core of the Cortadera discovery, which already sits at a staggering 104 million tonnes grading 0.74 per cent copper equivalent.

Hot Chili’s colossal Costa Fuego porphyry copper-gold project lies on Chile’s coastal strip, 600 kilometres north of the country’s capital of Santiago and 50km inland from the port of Los Lasas. The project hosts three giant porphyry discoveries consisting of the Cortadera, Productora and San Antonio ore bodies. Cumulatively, these three titans host an eye-catching endowment of base and precious metals that weighs in at 2.9 million tonnes of copper, 2.7 million ounces of gold and 9.9 million ounces of silver.

The resource book at Costa Fuego project tips the scales at a hefty 724 million tonnes running 0.48 per cent copper, 0.12 g/t gold and 0.7 g/t silver, cementing the project’s position as one of only two major copper discoveries in the last ten years, the other major discovery being Rio Tinto’s Winu deposit in Western Australia.

Hot Chili’s Chilean project also boasts enviable access to infrastructure including power, a nearby port and interestingly the Chilean government’s ENAMI’s Vallenar copper processing facility which lies just 15km north of the company’s Productora mine. Hot Chili is currently processing high-grade ores from its Productora operation through the ENAMI mill generating a tidy cash-flow for the budding copper developer.

The drill program across the Costa Fuego project area includes a reverse circulation, or “RC” rig drilling working at both Cuerpo 1 and 4, exploring a range of opportunities including the delineation of open pitable mineralisation and emplacement of pre-collars for ongoing diamond drilling. Upon the completion of the Cuerpo program the RC rig will move to begin probing the extensive Cortadera North target, north of the Cuerpo deposits, which is showing all the hallmarks of a repetition to the Cortadera porphyry system.

Following up the RC rig is a diamond drill which is currently completing an eight-hole, deep drilling program at Cuerpo 3 and is now more than 1,000m down drill hole CRP0046D. The primary diamond rig will be joined by a second diamond rig in the coming weeks, which will begin drilling outside Cuerpo 3 with three pre-collars already in place and a further five holes planned to expand the Cuerpo 2 deposit and to test the “gap zone” between the Cuerpo 2 and 3 ore bodies.

With Hot Chili already drilling up a storm in the Chilean desert and working to expand its high-grade resources through 2021, the company has a busy year ahead. So far it appears to be on track with what is an ambitious development schedule in its quest to add another chapter to the rich history of copper-gold porphyry discoveries in South America.