Hot Chili has identified a new conductivity and chargeability anomaly north of the Cuerpo 3 porphyry copper-gold ore system within its Cortadera project in central Chile, from reprocessed geophysical data. The company has also recorded visual chalcopyrite within mineralised porphyry over the entire extent of the first diamond hole in its Phase 2 drilling campaign at Cortadera. 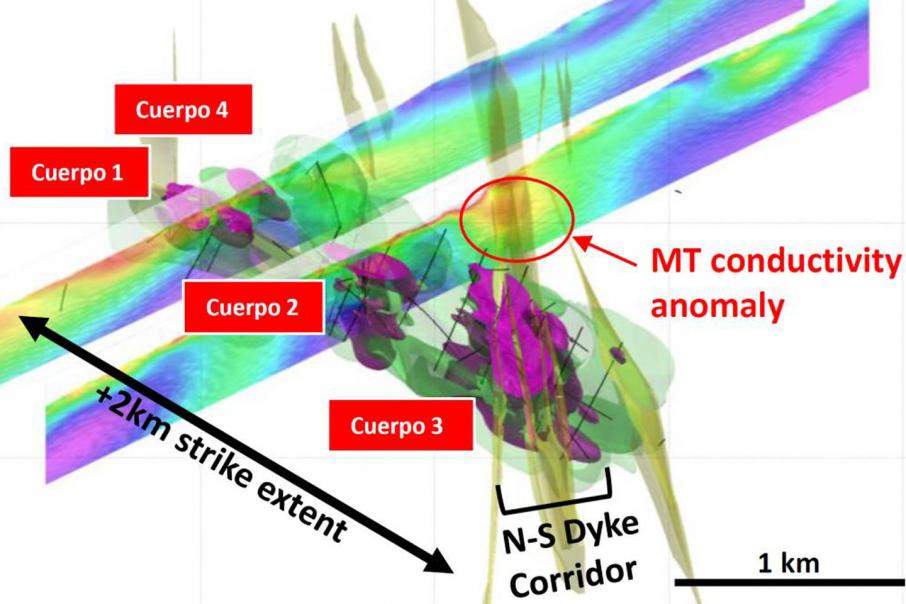 Hot Chili has identified a large conductivity and chargeability anomaly immediately down-plunge and about 400 metres north of the Cuerpo 3 porphyry copper-gold ore system within its Cortadera project in central Chile.

Management said the anomaly stretches over 1 kilometre of strike within a structural corridor that could influence the location of higher grades as well as the shape and extent of the porphyry system at Cortadera.

The anomaly is directly along trend from where the company is planning Phase 2 extensional definition drill holes.

Additionally, Hot Chili has completed the first diamond hole of its Phase 2 drilling campaign at Cortadera, which recorded visual copper sulphides as chalcopyrite, within mineralised porphyry for its entire extent.

Assay results will be released within the coming fortnight.

The company has also started a second hole to test a potential 240m extension to the new high-grade zone discovered at Cuerpo 3.

Previous drilling at Cuerpo 3, the largest of the four porphyries discovered to date at Cortadera, returned a juicy interval of 188 metres grading 0.9% copper and 0.4 grams per tonne gold within a wide intersection of 750m @ 0.6% copper and 0.2g/t gold from 204m down-hole.

Cortadera North was previously delineated but was never drill tested during the period of private project ownership that preceded the company’s exploration of the region.