A small copper mine acquired by Hot Chili within trucking distance of its Productora development looks like it could be sitting on a much bigger, higher grade copper deposit than previously thought. Small-scale lease mining in recent weeks produced 16.3 tonnes of ore at 5.24% copper from depths of less than 15 metres and has extended the strike length of high-grade, shallow copper to 1km. 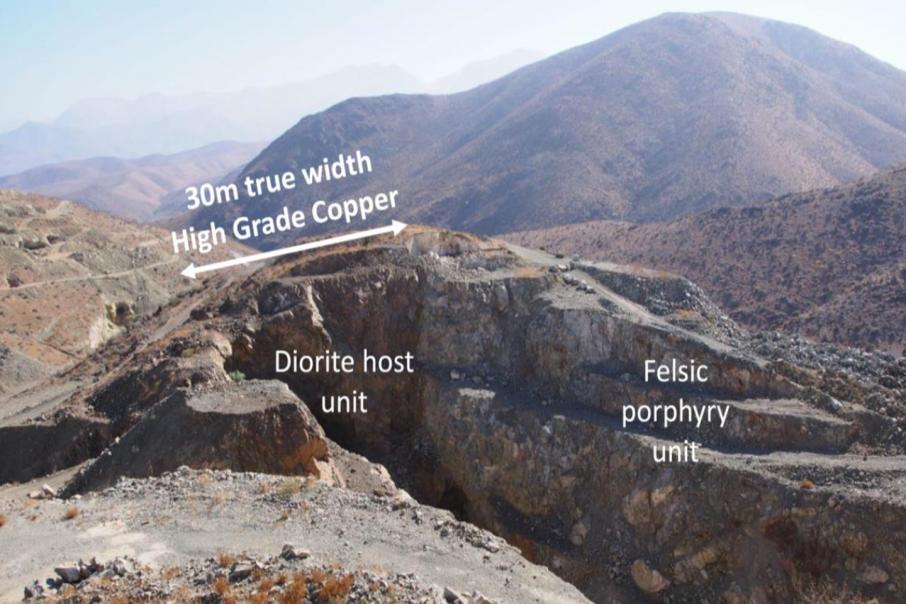 The San Antonio copper mine.

ASX listed Hot Chili’s recently acquired San Antonio copper mine in Chile could be much larger and higher grade than first expected.

The company has done a double take on the project following on from its exploration success and the remarkable efforts of small-scale lease miners.

Hot Chilli is best-known as the developer of the Productora copper mine in Chile, which has a resource base of 1.5Mt of copper and 1M ounces of gold.

The company last year began acquiring stranded, high grade ore bodies within trucking distance of Productora that could boost the economics of the project ahead of the completion of a definitive feasibility study.

One of the key deals was a four-year option struck in November to earn a 90% stake in the San Antonio mine, 20kms east of Productora.

San Antonio has been underground mined on a small scale by private owners since 1964. In more than 50 years, only 2Mt of ore has been extracted, averaging 2% copper and 0.5 g/t gold. Mining has been limited to a strike length of 200 metres and depths of up to 130 metres.

Hot Chili’s option agreement allows the historical private owners to mine up to 50,000 tonnes a year, which is processed nearby at a facility owned by Chile’s Nacional de Mineria known as ENAMI.

In an update lodged with the ASX this week, Hot Chili reported that ENAMI had just certified a 16.3 tonne sulphide ore parcel extracted by the lease miners, averaging 5.24% copper, 17 g/t silver and 0.2 g/t gold. The ore was reportedly extracted over a 2m true width from a depth of just 12m to 15m.

The copper ore parcel resets expectations about the grade potential at San Antonio. Just as importantly, the location at which it was mined – 300 metres south of the mine – confirms the presence of high-grade, shallow copper ore over 1km of strike length.

The idea of shallow 5% copper is normally unthinkable just about anywhere in the world, however San Antonio is in one of the world’s richest copper districts, albeit it has experienced very little modern exploration.

The lease miner’s remarkable efforts coincide with very encouraging results from early exploration by Hot Chili, including surface rock chip results of up to 4.43% copper. Consequently, San Antonio will now be the first priority of the upcoming drill campaign.

Hot Chili management said detailed exploration mapping had “outlined compelling characteristics of a potentially large-scale deposit setting. Given development widths of 7m to 30m within the current underground and surface workings, the large-scale potential of the deposit is only now becoming evident.”

“Importantly, this work and our improving understanding of mineralisation morphology and controls has highlighted that several of the previously completed nine historical drill holes across San Antonio have been ineffective, and that the majority of the deposit remains untested.”

San Antonio is one of three potentially high-grade satellites at Productora. San Antonio and the Valentina mine, just 5kms north, are within a contiguous parcel of leases now known as the El Fuego Copper project.30kms west of Productora is the newly optioned Lulu high-grade copper mine, which has been privately held since 1932.

These historical deposits have effectively been stranded for some time without a modern copper processing plant in the district.

Hot Chilli is aiming to reverse that trend and if recent samples are any kind of an indication of grade, they will really be onto something hot in Chile.