Hot Chili has delineated thick, copper-gold mineralisation at its Cuerpo 3 porphyry copper deposit in central Chile, with drilling returning 188m @ 0.9% copper and 0.4g/t gold from 516m down-hole within a much broader 750m intercept. The company said the result from the Cortadera project is one of the best intersections of its type recorded globally and is similar to notable bulk tonnage underground porphyry mines. 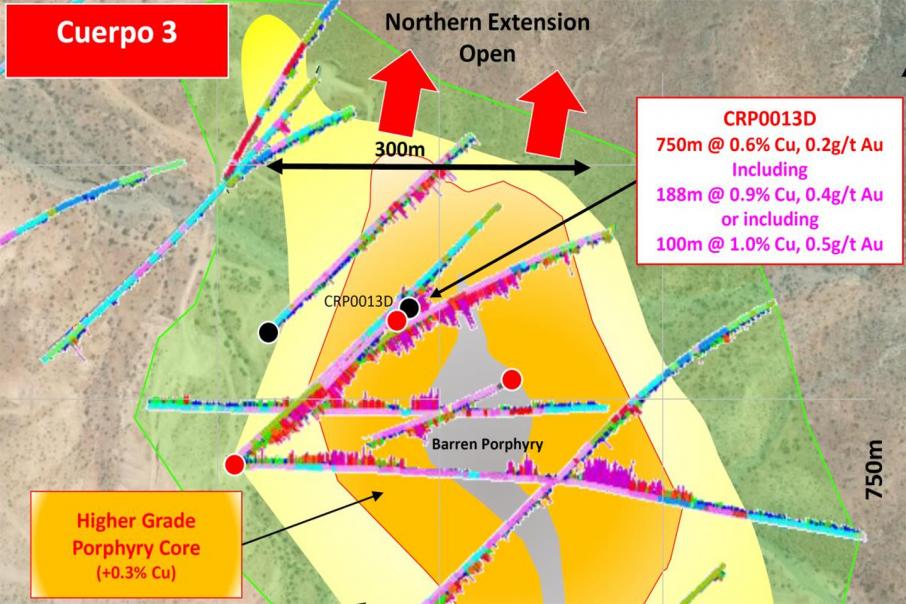 ASX-listed and Chilean-focussed copper developer, Hot Chili, has now extended its Cuerpo 3 porphyry copper-gold ore system to a vertical depth of 940m from surface following the receipt of final drill assays from a diamond hole nearly 1.2km long at the deposit.

The new assays extended the existing result by a further 128 metres vertically down-hole, with the updated intersection now standing at 750 metres grading 0.6% copper and 0.2g/t gold from 204m depth.

According to the company, this result from the emerging Cortadera porphyry copper-gold project is one of the best intersections of its type ever recorded globally.

Management said that identifying a bulk tonnage, higher-grade zone at considerable depth at Cortadera has altered its approach to its future potential development options for the project.

Hot Chili added that the higher-grade copper-gold mineralisation discovered at Cuerpo 3 exhibits similar geological features to those present in some of the world’s most notable large-scale underground porphyry mines.

Broadly, the company believes that its open pit development approach to combining the two nearby bulk tonnage deposits at Productora and Cortadera with high-grade satellite feed from the El Fuego copper project further east has been materially enhanced by the higher-grade underground opportunity presented at Cuerpo 3.

In addition, planning for the second phase drilling program at the exciting project is well underway utilising existing historical drilling data and the more recent work completed by the company since April.

Hot Chili has now completed its preliminary 3D modelling of Cuerpo 1, 2 and 3, which has highlighted a much broader mineralised porphyry system than previously recognised from the historical drilling at Cortadera.

Cortadera is outlined by a substantial, alteration-related system some 4km long by 3km wide.

Hot Chili believes the deposits bear all the features of a potentially world-class, gold-rich, large and integrated porphyry copper system in this prospective, underexplored region of Chile.