With the rods still turning at the company’s giant Cortadera copper-gold discovery in Chile, Hot Chili Limited has added further potential to its suite of projects by securing an additional 5,468-hectare land package known as “Santiago Z”. The additional land represents a twenty percent up-tick in the company’s landholdings at its Costa Fuego suite of tenements in Chile. 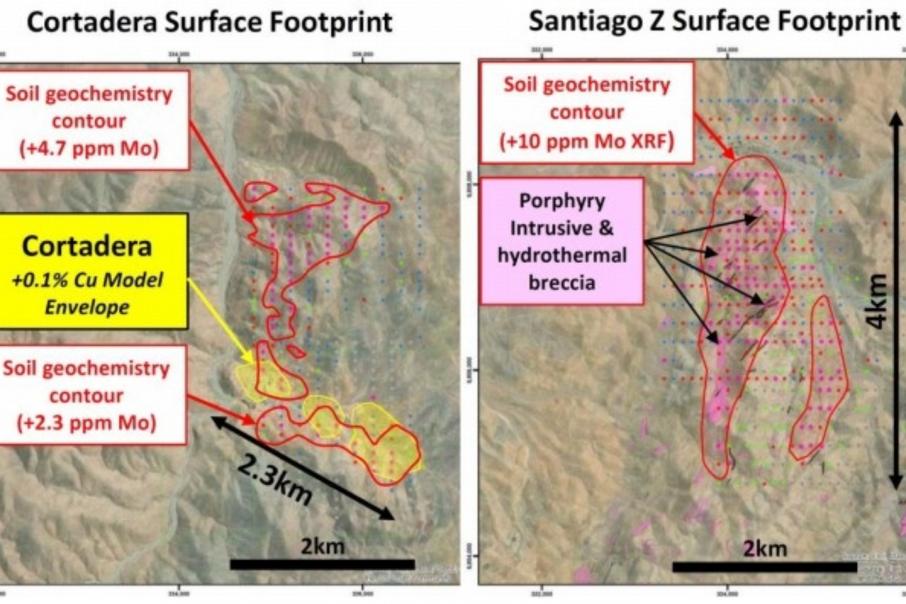 With the rods still turning at the company’s giant Cortadera copper-gold discovery in Chile, Hot Chili Limited has added further potential to its suite of projects by securing an additional 5,468-hectare land package known as “Santiago Z”. The additional land represents a 20 per cent increase in the company’s total landholdings at its Costa Fuego suite of tenements in Chile.

Located just 5 kilometres south of Cortadera, Santiago Z contains a 4km long soil molybdenum anomaly that is nearly double in size to the molybdenum soil anomaly which pointed to the Cortadera discovery. Importantly, molybdenum acts as a key pathfinder metal used to identify copper porphyry systems and given the similarity with the molybdenum anomaly at Contadera, the new acquisition adds further potential for new discoveries.

The company says the timetable will provide it with ample time to better assess the potential of the Santiago Z tenements with early works already underway including a mapping program and a soil geochemical sampling program completed in January. Whilst the more reliable lab assay results from the program are expected in the coming weeks, initial handheld XRF analysis has confirmed the size and grade of the historical molybdenum anomaly. Interestingly, the use of the XRF, whilst not always 100 per cent accurate, has been very effective in previous campaigns undertaken by Hot Chili in the region.

Although the newly acquired ground is in its early stages of exploration, the similarities to Cortadera are notable.  Since being acquired by Hot Chili in early 2019 and via successful drilling campaigns throughout 2019 and 2020, Cortadera has grown into a mammoth 451 million tonne deposit grading 0.46 per cent copper equivalent. This equates to some 1.2 million tonnes of contained copper, 800,000 ounces of gold, 9.86 million ounces of silver and 36 thousand tons of molybdenum.

The Cortadera discovery is part of the company’s Costa Fuego landholdings which in total boast a whopping 724 million tonnes of ore grading 0.48 per cent copper equivalent for 2.88 million tons of contained copper, 2.72 million ounces of gold, 9.86 million ounces of silver, and 63 thousand tonnes of molybdenum.

According to the company, there is strong potential for the resource to grow with further exploration drilling. In January this year, Hot Chili commenced an aggressive 40,000-metre drilling campaign aiming to take the resource towards a tier-one copper project. Three rigs are currently working overtime across the tenure aiming to deliver a major resource upgrade in the fourth quarter this year.

Whilst Hot Chili followers await the results of the on-going drilling campaign at Cortadera, they will also no doubt be paying attention to the newly acquired land at Santiago Z that just might turn out to be something of a sleeper for the company.