Hot Chili has delineated a potential fourth porphyry centre at its large Cortadera copper-gold discovery in central Chile, after securing further historical drill hole and geophysical data for the project area. This technical dataset has revealed a substantial, alteration-related outline some 4km long by 3km wide, which has all the markings of a potentially world-class gold-rich, porphyry copper system. 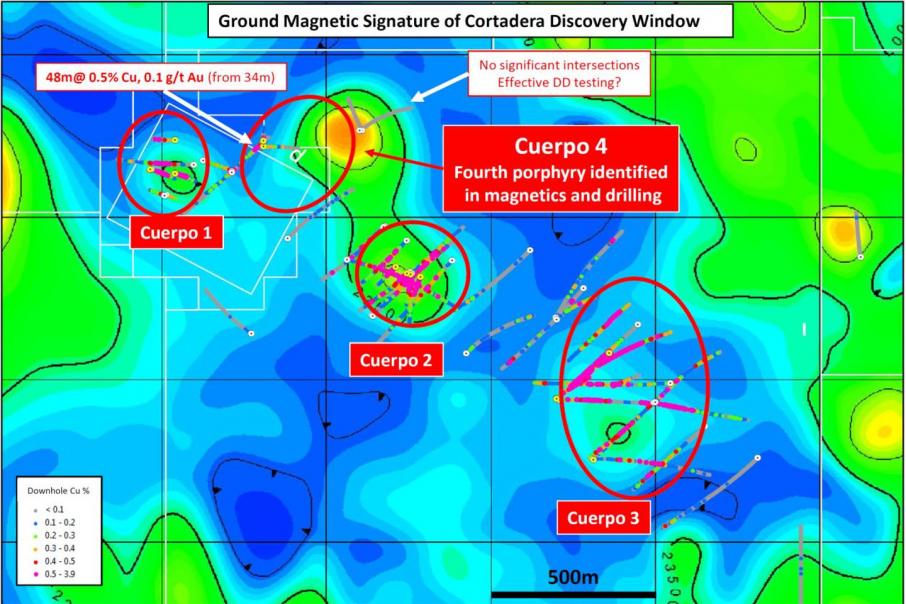 According to the company, an interpretation of magnetic data outlined a large signature footprint for a potential new copper porphyry system at Cortadera, that appears stronger than the existing features at Cuerpo 1, 2 and 3, which have already been the focus for significant drilling at the project.

By contrast, the new prospective centre called Cuerpo 4 has not been drilled in the past, with only one hole that returned 48 metres grading 0.5% copper and 0.1 grams per tonne gold from 34m down-hole, clipping the southern part of the magnetic anomaly that now defines the new target.

Significantly, Hot Chili has now secured geological logs for all historical work completed at Cortadera along with key digital datasets of geophysics, geochemistry, geological mapping and various modelling undertaken between 2011 and 2013, when the project was in private hands.

What the information reveals is a substantial, alteration-related outline some 4km long by 3km wide that has all the markings of a potentially world-class gold-rich, porphyry copper system in this prospective, underexplored region of Chile.

The new target at Cuerpo 4 sits almost bullseye in the centre of this impressive magnetic anomaly.

Management said that the acquisition of this historical data in combination with its ongoing diamond drilling program at Cortadera has virtually reset the company’s view of the potential scale of the ore system.

The company said that the identification of a potential fourth copper porphyry at Cortadera and other significant magnetic anomalies delineated from the historical data provides it with a wide scope for further expansion in the size of the discovery window across the project.

Hot Chili is presently completing diamond drilling on two fronts at Cortadera and further assay results from the program are due for release before the end of June.

Recent drilling at Cuerpo 3 also revealed the growth potential of that ore system, after Hot Chili confirmed a large northern extension to the main porphyry centre there.

Management said at the time that the hole at Cuerpo 3 recorded a thick intersection of porphyry from much deeper down-hole than it had expected.

Earlier RC drilling at the Cuerpo 1 and 2 porphyry centres had also confirmed the presence of large volumes of porphyry-related copper-gold mineralisation.

Hot Chili has also confirmed that higher-grade copper-gold intercepts at Cuerpo 2 are related to supergene chalcocite enrichment – a high-value copper mineral, opening up the potential for significant tonnages of elevated copper grades, with substantial gold credits, near to the surface.

The company executed a formal option agreement in February to acquire a 100% interest in the Cortadera project from its private owners.

Cortadera’s ore system remains open in all directions and demonstrates the potential to host a much larger global resource base than the company’s existing Productora deposit, which already holds 1.5 million tonnes of copper and about 1 million ounces of gold.

This week’s revelation of a potential fourth porphyry copper centre will fire up the Hot Chili’s effort further in Chile.

The company also secured the option to acquire the smaller Purisima mining right that is along strike from Cortadera and also contains wide, consistent intersections of copper-gold mineralisation from historical diamond drilling.