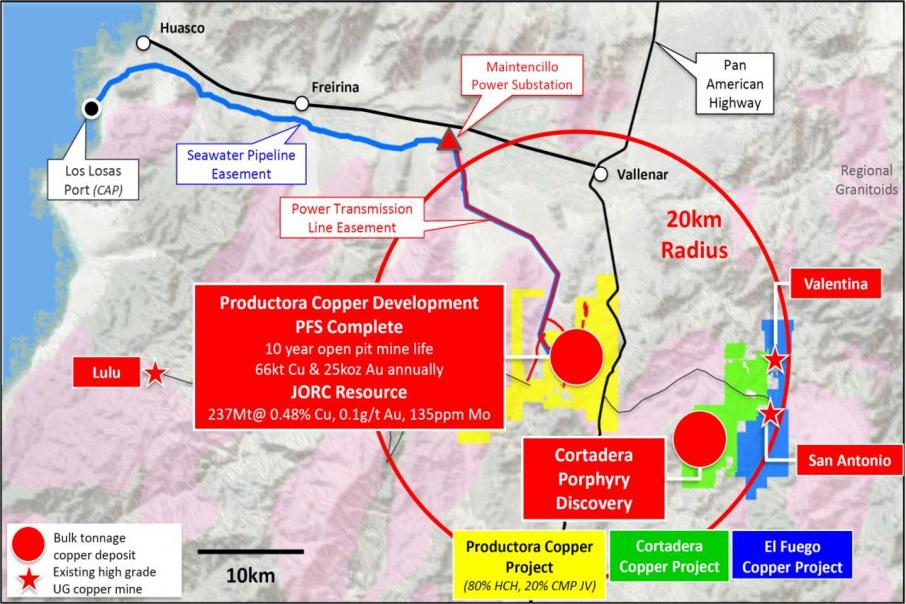 The acquisition generates an opportunity for the company to develop the Productora, Cortadera and high-grade satellite El Fuego deposits concurrently, utilising a central processing facility and hence potentially create a large new integrated copper mining operation in this region of Chile.

Hot Chili Management said: “The company is very pleased to be formally partnered with SCM Carola toward creating a globally significant new copper development for the Vallenar region of Chile, at a time of resurgent copper price conditions”.

Earlier this month, the company secured the option to acquire the Cortadera copper-gold discovery and the smaller Purisima mining right along strike, both of which contain extraordinarily wide, consistent intersections of copper-gold mineralisation from over 23,000 metres of diamond drilling.

According to Hot Chili, the Cortadera ore system contains some of the most robust porphyry copper-gold drilling results since Canadian-listed SolGold’s amazing Cascabel discovery in Ecuador in 2012.

That deposit now holds a global mineral resource of 5.2 million tonnes of copper and 12.3 million ounces of gold.

The company’s strategy here is clear, with Hot Chili aiming for a long tenancy in Chile, potentially doubling the mine life of the Productora project to at least 20 years, with the addition of Cortadera and the El Fuego satellite deposits.

The company previously stated that it expected to commence drilling at the Cortadera deposit in the coming months and prove up a JORC-compliant mineral resource at the property.

Hot Chili already has a head start with around USD$15m of drilling having already been pumped into Cortadera by the previous owners.

The acquisition of Cortadera has the potential to completely transform Hot Chili’s fortunes in South America as it aspires to become the next significant global copper producer.