Horizon Minerals and Northern Star Resources have reached an agreement to swap tenements prospective for gold mineralisation in WA’s Goldfields region. Horizon will secure three projects near Coolgardie to support its current acquisition proposal for Focus Minerals’ adjacent Coolgardie gold project holdings and four projects near Kalgoorlie, including Golden Ridge which has produced over 253,000 ounces of gold. 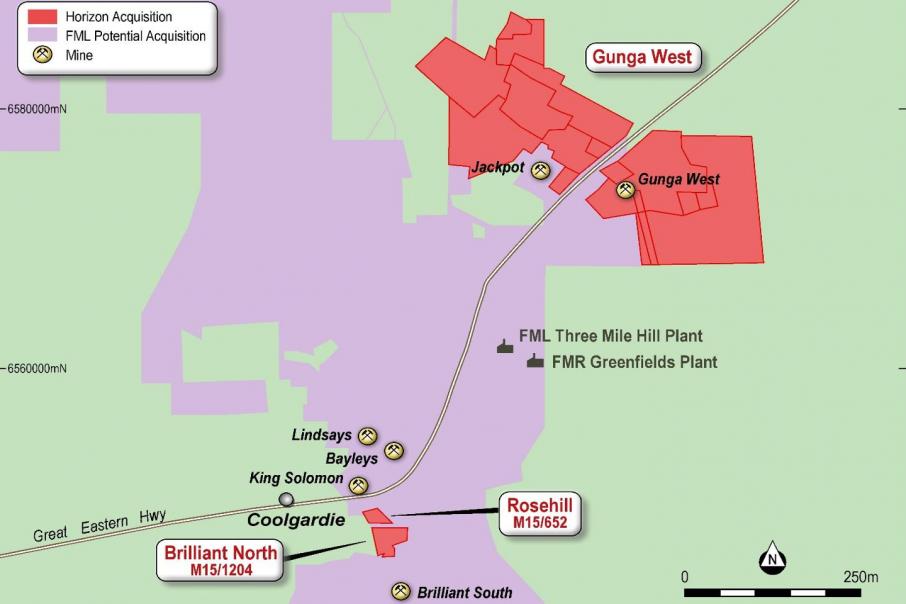 Horizon Minerals has reached an agreement with gold miner Northern Star Resources for a strategic swap of mining tenements, which will strengthen the company’s gold project holdings near Kalgoorlie and Coolgardie in the WA Goldfields region.

The company will divest its 100% interest in numerous regional project tenements to Northern Star, including the Anthill, Blister Dam, New Mexico, White Flag and Kanowna North.

In return, Horizon will acquire a 100% interest in Northern Star's Rosehill, Brilliant North and Gunga West projects near Coolgardie and the Golden Ridge, Balagundi, Abattoir and Mt Monger projects near Kalgoorlie.

The tenement exchange agreement is expected to be completed during the December quarter of 2019.

The Rosehill and Brilliant North projects are located on granted mining leases close to the Coolgardie township and Rosehill has produced about 1,340 ounces of gold at 8.3g/t gold from 5,000 tonnes since 1898, according to Horizon management.

Less than a kilometre to the northeast, the Gunga West leases are situated close to Focus Minerals’ Three Mile Hill gold processing plant, which is currently on care and maintenance.

The company said that the Coolgardie assets being acquired from Northern Star are considered strongly prospective for mineral resource extensions in both the open-cut and underground mining development scenarios.

Horizon added that on completion of the acquisition, the Coolgardie assets will be consolidated into the company’s existing geological database and will form part of its broader feasibility study due for completion in the middle of next year.

Adjacent to the company’s Boorara and Nimbus projects, about 10km west of Kalgoorlie, Horizon will also acquire the historical Golden Ridge gold mine, directly south and along strike from Boorara.

Golden Ridge was then mined via open-cut methods between 1998 and 2004, producing a further 113,520 ounces at just under 2g/t gold, but has received very little exploratory attention in the 15 years since, according to Horizon.

The company intends to undertake a detailed geological review of Golden Ridge, once the tenement swap with Northern Star is complete.

Commenting on the asset swap, Horizon Managing Director Jon Price said: “This is a sensible transaction between Horizon and Northern Star that place assets within each company’s areas of interest.”

“For Horizon, it adds contiguous tenure to the Boorara gold project area in Kalgoorlie and additional strategic assets in Coolgardie including the Rose Hill - Brilliant North tenements which give us the ability to unlock the full value of the Coolgardie gold project as we continue to progress formal binding documentation and required approvals for the potential acquisition.”