Hoppy days at The Quarie

Beer and the classroom don’t normally go together, but one publican in Perth’s southern suburbs is trying his hardest to change that. 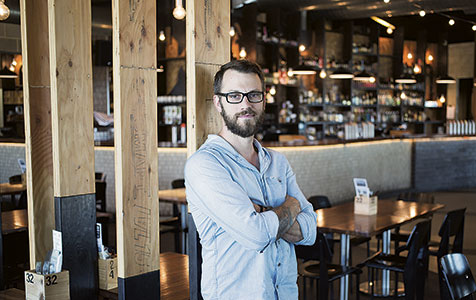 BREW SCHOOL: Matt Marinich says he has an unwavering commitment to serving quality beers at The Quarie. Photo: Attila Csaszar

Self-confessed beer geek Matt Marinich wants to teach you a thing or two about your favourite brew.

So much so that the newly-crowned Beertender of the Year – an annual award from beer industry bible Beer & Brewer magazine – runs a monthly ‘Beer Skool’ at southern suburban pub The Quarie.

The classes, which cost between $30 and $50 and include testers of six different varieties of beer, educate punters on the ins and outs of brewing, as well as a history lesson on where, when and why particular styles of beer originated.

And if you had any doubts about Mr Marinich’s ‘beerologist’ credentials, The Quarie’s house ale, which he developed in collaboration with the Last Drop Brewery’s Jan Bruckner, won a bronze medal in the Australian Ale category at this year’s Perth Royal Beer Show.

Mr Marinich also won three bronze, a silver and a commendation in the amateur brewing section of the awards.

The Beer Skool initiative, which attracts about 50 people each month, has lifted the profile of The Quarie, which has only been open since 2011, to the stage where Beer & Brewer named the venue’s beer menu the second best in Australia late last month.

“It’s on the increase, people seeking out different beer, and it’s become cooler for people to understand more about beer and explain that to their mates,” Mr Marinich told Gusto.

“So with Beer Skool (and also over the bar) we’re very big on beer education and making sure people understand what craft beer is.

“It’s not just about VB and Hahn Super Dry and those kinds of beers.”

The emphasis on education also carries over to training staff.

Mr Marinich says there’s no point offering unique and interesting options to punters unless the bartender serving them knows what they are selling.

“It’s crucial for front-of-house staff to know what they’re talking about,” he says.

“When I do staff training I speak quite emotively about the beer, and I do get really passionate about it because I could talk about it forever, if time allowed.

Also attracting punters to the pub is Tuesday night’s Crafty Kids, a sort of crèche where parents can send their children to be supervised by a qualified childcare worker while they enjoy a relatively peaceful and quiet meal.

Mr Marinich says the family-friendly focus sets The Quarie apart from the nearby The Gate pub in Cockburn, which he describes as a party venue catered more towards workers with its TAB facilities and pool room.

“About 60 per cent of our on-premise revenue is related to food,” he says.

“With that, we can do a lot of really cool things with food matching with beer, beer degustation dinners and things like that.

“I think it’s a good point of difference that a lot of other pubs nowadays don’t have the chance to do.”