BlackEarth Minerals has received an outstanding set of high grade graphite assays from its maiden surface trenching program at the Ianapera project located in southern Madagascar. Best results included 18m grading 22.1% total graphitic carbon, which included 8m @ 32.7% TGC and an incredible 2m @ 46% TGC. The trench samples approximate the true width of the mineralisation and outline the potential for a significant resource tonnage. 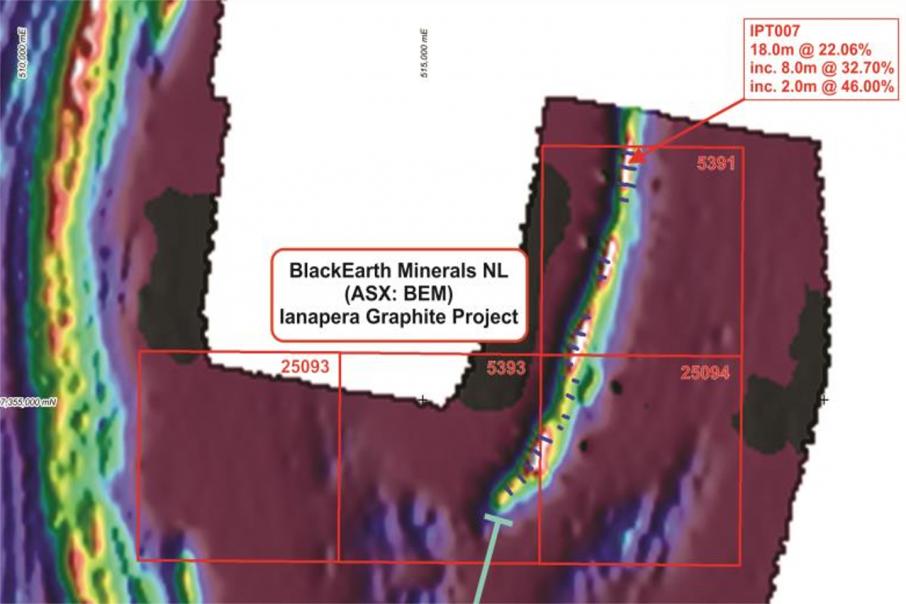 If there were any lingering doubts about the quality of BlackEarth Minerals’ graphite assets in Madagascar, they were dispelled this week, with a set of outstanding high-grade trenching results from its Ianapera project in the south of the country.

The trench samples approximate the true width of the mineralisation and outline the potential for a significant resource tonnage at the project.

According to BlackEarth, the initial trenching results from Ianapera represent some of the highest graphite grades achieved globally and certainly within Madagascar.

The higher-grade mineralisation at the project appears to be concentrated in four specific zones of higher electrical conductivity and all were targeted during the recent surface trench sampling program.

The company undertook the maiden trenching program at Ianapera late last year and covered about 4.5km of strike on highly conductive zones that were interpreted to host graphite mineralisation.

A significant number of assay results from the exploratory sampling program at Ianapera are pending and will be reported as they come to hand, according to management.

NextSource has a 40-year mining permit granted over the Molo project and is moving closer to financing and building that project.

The company said that this region of Madagascar could potentially become a global hub for graphite mining production and processing, located only a short distance from the coastline, which faces the Indian Ocean.

BlackEarth’s emerging Maniry graphite project is centred about 70km south-southwest of Ianapera and is located even closer to the coast.

Managing Director Tom Revy said: “These results reaffirm the Board’s belief that Ianapera has the potential to add significant value to BEM with results exceeding even our expectations. We will continue to undertake exploration in the area and investigate the various options that may exist to extract maximum value for our shareholders.”

The new assay results from Ianapera follows on from encouraging metallurgical test work from the Maniry project that confirmed those ores were capable of producing a high grade, premium grade large flake concentrates by simple processing.

These concentrates had TGC grades exceeding 95% across all concentrate particle size distributions and the product was extremely clean, being free of penalty contaminants.

In late January, BlackEarth announced a positive scoping study for the Maniry project, that outlined an initial ten-year mine life operation and pre-tax NPV of USD$103m and IRR of 42%, with payback in just under three years for a proposed Stage 1 development.