Northern Minerals has delivered high grades of rare earth element mineralisation from drilling its regional prospects at the Browns Range operation near Halls Creek in WA. Results include 16.59m @ 7.53% TREO from 27m at the Dazzler deposit and 4.43m @ 8.07% TREO from 21m at Iceman, up to 10 times the total mineral resource grade currently being mined from the operation 15km to the north. 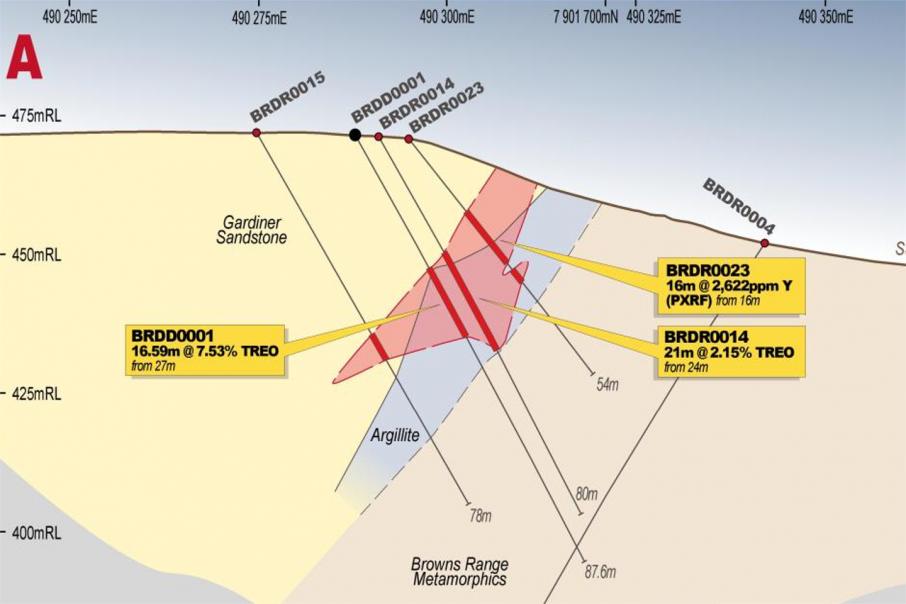 Management said the grades were some of the highest returned from Browns Range and up to 10 times the total mineral resource grade currently being mined from the operation , 15km to the north.

A lower-grade zone of 10.3m @ 0.55% TREO from 48m down-hole was also recorded from Dazzler, which is more in line with the grades of the company’s Wolverine and Gambit West deposits and hosted in the same rock sequence as those ore bodies.

The company is now poised to wrap an updated mineral resource estimate around the Dazzler prospect later this quarter.

The high-grade zone at Dazzler is associated with a sedimentary unit close to a contact between sandstone and metamorphic rocks, whilst the low-grade zone was entirely within the footwall metamorphic sequence.

Northern said that the high-grade mineralisation at the Dazzler and Iceman prospects makes for an attractive target for the company, with such satellite deposits potentially acting as significant sweeteners to the more modest grades being extracted from Browns Range.

As with Browns Range, Dazzler and Iceman contain significant quantities of the sought-after element dysprosium, which is a key material utilised in making permanent industrial magnets used in the motors of electric vehicles amongst other applications.

The company is sitting on significant land holdings straddling this region near in the WA – Northern Territory boundary, which is underexplored by 21st Century standards.

Northern Minerals Managing Director George Bauk said: “The grades returned in this program are amongst the highest we have ever seen at Browns Range.”

“We have already commenced the process of acquiring and installing Steinert ore sorting technology at Browns Range, aimed at doubling the feed grade to the plant.”

“The extremely high grades at Dazzler and Iceman have the potential to increase the grade going into the plant even further.”

“As with all resources projects, ‘grade is king’ and we look forward to increasing the value of Browns Range.”

Meanwhile, rare earth carbonate production continues at the company’s pilot plant project at Browns Range, which kicked off in earnest in July 2018.

The success of the operational flowsheet being employed to process the Browns Range mineralisation hosted by the mineral xenotime, has given Northern Minerals confidence that it will also potentially be able to treat the higher-grade Dazzler and Iceman rare earth ore materials in the future.

The regional deposits lie near the scarp of a 20m high range and hence their geometry is considered suitable for extraction using conventional open pit mining methods, if economic to do so.