Sometimes you want to go where everybody knows your name ... Russell Quinn reports. 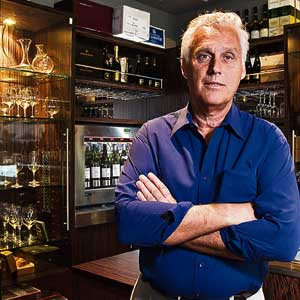 Fresh Approach: Murray McHenry says the Enomatic Machines will be popular among wine drinkers and diners

SINCE 1935, Murray McHenry's family has been behind the bar at the Nedlands Park Hotel.

Its more famous moniker is Steve's Hotel, but after a spectacular development of the riverfront site involving a joint venture agreement with construction giant Multiplex, for the past five weeks it's been trading as Steves Fine Wine and Food.

And don't worry, Murray is still behind the bar, albeit a much smaller, sophisticated one than the hotel's popular, long curved bar, which has propped up countless university students over the years.

During the past 84 years, the family's Irish flag has waved prominently on Broadway, initiated by Murray's late father, Stephen, who was publican for about 23 years and the inspiration behind the pub's name.

"It was Nedlands Park Hotel but people would say 'we're off to Steve's', that was the slogan and it caught on and caught on and then he died and people kept saying 'we're going to Steve's', so hence the name lives on," Mr McHenry told Gusto.

His mother kept the place going during the war years as Stephen, one of the Rats of Tobruk, was captured and taken a prisoner of war.

Then, in 1977, Mr McHenry sought to buy the hotel from the Swan Brewery when the local brewer tried to raise capital to pay for its newly built facility in Canning Vale.

But as a spritely 27 year old, he found lending conditions difficult to meet.

Following a failed loan proposal with one of the banks, a chance meeting with merchant banker Peter Lucas on St Georges Terrace led to success.

"At that time Peter was CEO of a company called CIBC, which was Canadian Imperial Banking Company," Mr McHenry says.

"They were trying to get some businesses in Perth, I told them the story, he liked it ... and that was 11 in the morning; by 2pm that afternoon I had my approval."

The original Steve's was situated in the 100-year-old federation building in the centre of the 1-hectare site alongside a drive-through bottle shop.

The building has now been restored and converted into four multi-million dollar apartments, which Mr McHenry plans to put up for sale.

However, the sprawling hotel grounds and 'bottlo' has been replaced by a much smaller tapas bar and restaurant with a walk-in cheese cool room, a fine wine shop and boutique beers on offer.

But the most interesting aspect of the revamped Steves (nee Steve's) is Mr McHenry's installation of the latest wine dispensing technology from Italy, called 'Enomatic' machines.

Gas pressurised wine taps allow drinkers to dip into the million dollar cellar and taste a wide variety of reds and chilled whites by the glass, simply by swiping a bar card supplied by staff in return for a credit card.

"I wanted interaction with our clients," Mr McHenry says.

"We've got it (the Enomatic machine) in the fine wine shop, the staff are standing right there and as much as I let you have the card and put the card in, it's in a controlled environment.

"I think you're going to see more of those machines coming into place."

Bringing in Brian Layden, Mr McHenry's partner in Mustard Catering, and Francesca Nelson, one of the founders of Vans in Cottesloe, to head up the restaurant has helped its development run smoothly.

But don't expect Mr McHenry to disappear from behind the bar anytime soon.

"I hope we stay affiliated to this building and the cafe next door for a long time," he said.

"It's been a dynasty, I suppose. We're one of the longest continuing licensees in WA by now."