It's no small decision to walk away from the security of an established career to head-up a new business venture – particularly when the business in question is one of the first of its kind in a new sector. 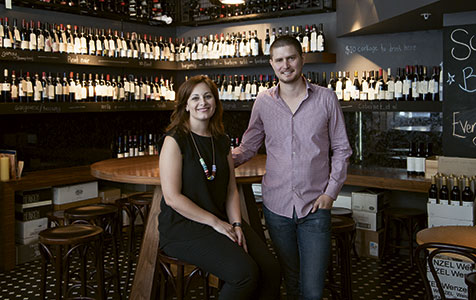 Cristina Fego and David Gillman have built a solid team at Helvetica and are now into the second year at Lalla Rookh. Photos: Attila Csazar

It's no small decision to walk away from the security of an established career to head-up a new business venture – particularly when the business in question is one of the first of its kind in a new sector.

But that’s exactly what Cristina Fego did in 2009 when she turned her back on her role as a successful interior designer to become one of three directors of Helvetica bar.

Fellow director David Durack was also entering foreign territory, he was a banking and finance professional with no hospitality experience when the idea of opening a bar was proposed.

Helvetica was one of the first small bars to open in Perth and has since become known as a leader in establishing the new drinking culture in the CBD.

"Dave and I both worked in the city and at the time we were frustrated because we wanted to go out for a few drinks but there wasn't really a lot happening in the city," Ms Fego said.

"All of our friends were moving to Melbourne and we were like 'no we don't have to do that, we can do something in Perth'."

The bar’s success could partly be attributed to the expertise of the third director, David Gillman, who after years working with hospitality heavyweight Nic Tromboli was enticed by the Helvetica concept and took on the role as general manager.

Now, Ms Fego and Messrs Gillman and Durack are proving their worth in the hospitality scene through their second venture – Lalla Rookh on St Georges Terrace.

Named after a gold mine with pitiful resources but a stellar wet mess, Lalla Rookh is nestled beneath Allendale Square with its understated street level entrance belying the expansive underground venue.

Another Trimboli protégé, Patrick Ryan, has joined the team as a director and general manager of the new venue, which has previously been known as Emporio Bar and The Foxy Lady.

The fifth director of Lalla Rookh, which is run as a business entity separate from Helvetica, is Jeremy Prus – one of the three finalists vying for the title of Gourmet Traveller 2014 sommelier of the year.

Mr Prus is also a former employee of Mr Trimboli, having worked at Duende and Balthazar.

Other venues have sprung up around Lalla Rookh in the 18 months since it opened but the directors said the additional competition was no threat.

Instead, they’ve utilised the spotlight being on other venues by finding their feet and adjusting the venue to suit the market.

That’s included altering the menu from a structured three-course dining structure to a more informal offering incorporating the current trend of share plates.

For those who can still justify spending on a fine drop, the venue’s wine store offers the same restaurant menu in a separate section that also offers speciality local and imported wine.

The team hopes that building the Lalla Rookh brand and proving Helvetica’s success was more good management than just good fortune will help dispel the perception of hospitality as a second-rate career or a sector for those in between jobs.

Mr Gillman offers himself as a living proof example.

“For us hospitality is most definitely a solid career,” he said.

“I have no qualifications but I’m 30 and I’ve got two businesses; that’s the possibility you have in this industry.

“Whether it’s a bar or a little cafe on the corner, there’s an opportunity there for anyone.”

Mr Gillman said working for Mr Trimboli meant being surrounded by people who were passionate about hospitality, which made all the difference in how working at the business was perceived by staff.

As the key point of contact with staff, Mr Ryan said he tried to facilitate open communication, but he also said that employing the right people from the start was important.

“We probably recruit on personality as much as experience; you can train people about wine and how to carry plates,” Mr Ryan told Business News.

“It’s not easy to find staff, but obviously it’s important to do what you can so they feel like they’re happy working there and they’re growing as well.

“And we talk to staff about them being here in 12 months’ time and organise things for further down the track, so I think that encourages them to feel like they’re still valued and wanted for that long.”

It’s a long way from interior design, but Ms Fego said there was no looking back.

“It’s a nice dynamic; it’s busy and there’s this nice positive vibe every day … you don’t have that in an office situation,” she said.

“It’s a nice atmosphere to be around.”