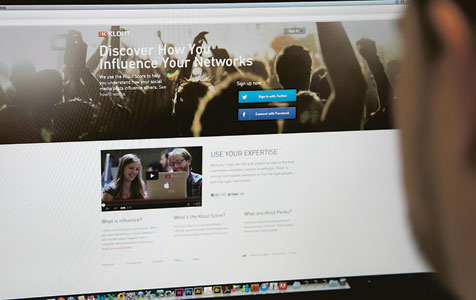 People with ‘clout’ are generally considered those who exert some level of influence over others; they are listened to, and followed.

It should come as no surprise to learn, therefore, that the web has a version (‘Klout’) that can measure an individual’s (or a company’s) influence among the online community.

Established in 2008, Klout.com is a free service that analyses social media posts and engagements across these networks. Its ‘secret sauce’ then calculates your Klout score out of 100.

Klout can track how influential you are, and can also help you find the most influential people on the web.

Remember, it’s not what you say about your brand on social media that’s important, it’s what others say about you.

None of this is particularly new.

Published in 2000, Malcolm Gladwell’s book The Tipping Point explained why some ideas, products and events take off (go past the so-called ‘tipping point’) and why others don’t. One of the key ingredients of something that ‘tips’ is to have influential people (‘connectors’) who link us with the world.

Another essential element in this process is the people Gladwell called ‘mavens’ – people we rely on to connect us with new information. They accumulate knowledge and love to share it. They can’t help themselves.

Thirteen years on and information is being spread like never before over social networking sites. A billion people are on Facebook, half are online every day (some all day). In Western Australia, 1.2 million people have active accounts on Facebook, where mavens and connectors are in their element; they connect, they share, they pass on.

These people are instrumental in connecting us to the information we want.

As they are the influencers of opinion online, they also play a crucial role in passing on our own information to a much wider audience.

Having enough mavens and connectors on your Facebook business page, following your twitter stream and reading your blog is crucial to your success online. Without them, you are talking to an empty room.

Virgin Airlines actively seek out people with high Klout scores. They give these people the red carpet treatment, with free trips whenever they want to promote a new route or service. They treat them like royalty and then sit back and watch what happens. It’s much cheaper (and far more effective) getting those with Klout to promote on your behalf.

One way to find these influencers is to create a list of people in twitter, and then import them into Klout. Instantly, the list is then ranked in terms of their Klout score. You now know who to engage with.

In March this year, Klout announced a new service, Klout for Business. This will allow brands to see what makes an impact (and what does not), and give businesses a way of gauging which topics are popular with their followers.

It’s too early to tell if this will be a useful new idea or not. However, it’s the first move for Klout to progress beyond a simple scoring system and into the realm of business.

If you can reach the influential people, then what you say can be carried forth in the wind to those far and wise across the social media landscape.

So I may ask, for those of you who think you may have clout, do you have klout?

Charlie Gunningham is a internet entrepreneur and Business News general manager of digital.