Get a few dozen programmers and health practitioners together for a three-day weekend starting Friday, throw some problems at them, then tell them to come up with solutions by Sunday afternoon. 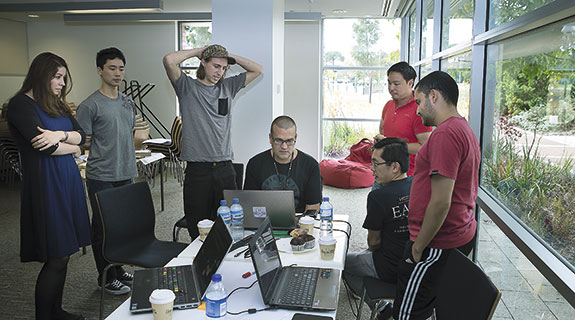 DOWN TO BUSINESS: HealthHack participants in Perth came up with as many solutions as their counterparts in other states, with fewer resources. Photo: Dimi Spirovski/Jospi Photography

Get a few dozen programmers and health practitioners together for a three-day weekend starting Friday, throw some problems at them, then tell them to come up with solutions by Sunday afternoon.

Much like other hackathons, the basic premise behind last month’s event, jointly organised by Thoughtworks and Curtin University, was to develop solutions to real problems, and demonstrate what could be achieved with some focused, energetic collaboration.

Perth’s HealthHack was run simultaneously with similar events in Sydney, Melbourne and Brisbane.

In the lead-up to the event, the organisers worked with medical researchers and health professionals to create challenges that might be solved in a hackathon environment.

On the first evening, 11 ‘problem owners’ pitched their challenges in two minutes to the 35 software developers, data scientists and product developers. They then formed into eight (roughly even) teams to develop solutions.

By 3pm on Sunday, the teams had to showcase their solutions and provide demonstrations in a five-minute pitch to judges.

Despite being involved for the first time, Perth teams managed to develop eight solutions within the timeframe, which was on a par with the other cities despite having significantly fewer participants.

“You might say we were the most productive city,” co-organiser and Thoughtworks consultant David Colls told Business News.

Solutions included: a phone app that could calculate an individual’s sun exposure and skin cancer risk; an unsteadiness detector to help reduce falls in elderly patients; an analysis to help manage the effects of superbugs; and an investigation of the linkage of teenage drinking to alcohol pricing.

“We were really impressed with the quality of the problems posed,” Curtin University strategic projects director Paul Nicholls told Business News. “Two of the solutions were software products that will be taken up by the groups that championed their development, while the other six were valuable demonstrations which can inform future approaches.”

Perth was introduced to hackathons in September 2012, when the first Startup Weekend was held at Spacecubed.

Western Australia’s seventh Startup Weekend will be run from November 13 to 15, again at Spacecubed.

Since the city’s first event there has been GovHack (a hackathon solving problems for government) and several Unearthed hackathons, dedicated to the mining industry, which started in Perth in 2014 but has spread to Brisbane, Sydney and Adelaide, with Melbourne to come this weekend.

Simply Wall St, now based in Sydney, was formed after the idea was originally developed at a Perth Startup Weekend in 2013.

“Hackathons are one way any organisation can encourage a broader innovative culture,” Mr Nicholls said.

“Common elements include multi-disciplinary teams, customer collaboration, iterative development and the use of constraints to force creative solutions.”