Have a look at the Hyatt

THE crashing of pans and clashing of egos may be the norm in any large kitchen, but one notable Perth eatery has brought the action front and centre as part of its latest makeover. 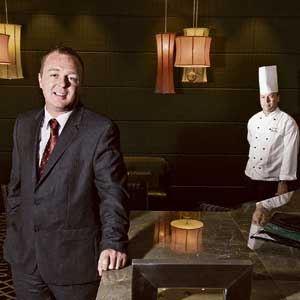 IN FULL VIEW: Mark Sainsbury and Brian Loughnane are emjoying their new working environment after renovations at Cafe and Gershwin\'s

THE crashing of pans and clashing of egos may be the norm in any large kitchen, but one notable Perth eatery has brought the action front and centre as part of its latest makeover.

The Hyatt Regency Perth has built a reputation for versatility and for setting the benchmark in buffet-style banquets during the past decade with its aptly titled Café.

However, both Café and the Hyatt's flagship restaurant, Gershwin's, have undergone a transformation.

The changes at both restaurants have been carefully configured to meet the needs of modern-day diners and hotel guests - a constant theme in the Hyatt's long-term business strategy.

More than six months of renovations costing about $2.5 million were revealed in July last year when Café re-opened its doors.

The old-school trestle tables banked along the walls, complete with dated warming ovens are gone.

Instead, there are three separate cooking stations spread across the restaurant, each manned by chefs preparing, cooking and serving customers a wide variety of meals made from local produce.

This personal interaction between the chefs and customers in a buffet-style restaurant was the first of its kind in Australia and has since been adapted to the Melbourne market, opening at the Grand Hyatt in November.

The idea came from the Hyatt in Singapore and was adapted to the Perth hotel, which presented some challenges along the way.

Hyatt executive chef Mark Sainsbury has been with the company for 15 years and says bringing the chefs out of the kitchen and interacting with customers has worked extremely well.

"It took a little while for the chefs to get used to being so close to customers, but they've warmed to it," Mr Sainsbury told Gusto.

"Terminology was something we spent a lot of time doing, which helped them to learn what to say - not 'don't worry mate I'll do it for you' but rather it's 'yes I'll cook something for you'.

"So it was a really good learning curve for us."

And Mr Sainsbury is adamant the often-heated exchanges that can occur in a traditional kitchen haven't been a problem for the new Café.

"I think a lot of the chefs are just very conservative people; if anything it's been hard to get them to talk," Mr Sainsbury says.

Food and beverage director Brian Loughnane says the changes to Café have been invaluable for his staff.

"I don't think the kitchen gets that sense of seeing the satisfaction side of things," he says.

"So it's not so much, 'this is what I can give you, these are our products' ... they also get the feedback first hand so they can see the guests' satisfaction."

Mr Sainsbury thinks this forges a stronger relationship with customers, taking away some of the mystery.

"It also creates a very nice atmosphere to see the people cooking your food, and people are very interested in what chefs do ... they can see it and speak to them."

And keeping the customers happy is of paramount importance, especially the 1,300 local members of the Hyatt's global loyalty program.

"For Perth it's very strongly supported through food and beverage, so a lot of the diners are joining us three times a week," Mr Loughnane told Gusto.

"They're very vocal and, like the senior staff, they're not afraid to tell us and keep us in check and make sure were doing a good job and their opinions matter."

It was this feedback, and customer demand for private parties and functions that led to changes at the Hyatt's signature restaurant, Gershwin's.

"I was there for the original opening, so it's very dear to my heart and when we had to make the call to not do a la carte anymore it was a real tug but the reality is that we needed something new," Mr Sainsbury says.

Gershwin's is now available to rent as a private dining or function room, and will only revert to a la carte during holiday seasons.

Mr Loughnane says meeting the needs of the most particular customers is always top of mind, especially in light of the slowing economy.

"We will have fewer customers this year than last year in the hotel, which will give us fewer customers to aim towards, but I think it's just adapting to it and making sure we are consistently offering what we do best," Mr Loughnane said.