Liza Harvey has positioned herself as a reliable ally for WA businesses, outlining an agenda prioritising job creation and economic diversification at a Politics & Policy breakfast today. 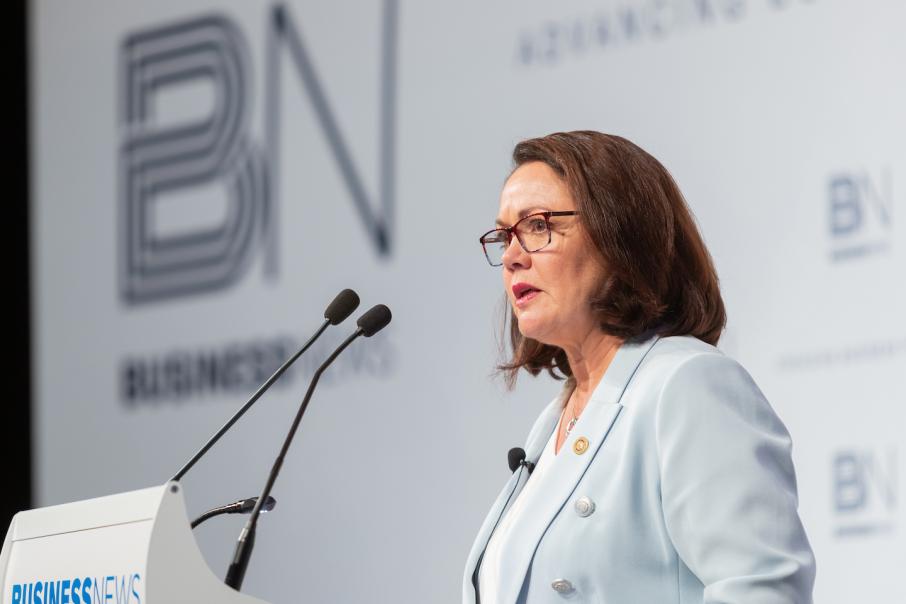 Liza Harvey has positioned herself as a reliable ally for WA businesses, outlining an agenda prioritising job creation and economic diversification at a Politics & Policy breakfast today.

State opposition leader Liza Harvey understands the challenges she and her party face next year.

With just 13 seats in state parliament, the Liberal Party WA, which Mrs Harvey has led since July of last year, will need to win a uniform swing of 7.8 per cent at next year’s election if it hopes to form government, according to ABC psephologist Antony Green.

Facing those daunting numbers daily, Mrs Harvey came to today’s Business News Politics & Policy breakfast eager to make the case to the room of business leaders that she was best positioned to lead the state through tough economic times.

Though her pitch included criticisms of the current state government’s approach to international education, tourism and infrastructure, it was Mrs Harvey’s invocation of her late husband, Hal, and their business Bluewater Tackle that proved most instructive to her positions.

Discussing her background running a business that, at its peak employed around 50 people, she argued that experience dealing with increased compliance costs, high rents and energy price hikes as a business leader made her a natural ally for businesses in Western Australia.

“I am not a career politician,” Mrs Harvey said.

“I did not move from a desk job into a safe seat, I wasn’t groomed by a union, I didn’t cut my teeth in local government for the party.

She said her experience informed her beliefs and would ultimately guide her policy decisions, should she become premier after next year’s election.

“Each decision a government I lead makes will be made through the lens of how it [the decision] will improve or impact WA families and businesses,” Mrs Harvey told the forum.

While scarce on policy specifics, Mrs Harvey outlined her priorities ahead of next year’s election, including a rollback of regulation, the creation of jobs in the mining sector, and increased spending on marketing of tourism and international education.

Key to her vision was a diversification of the state’s industries, which she said would be important given the nature of WA’s cyclical economy.

To do so, she proposed building on the state’s advantages in the resources sector, offering support to existing iron ore, crude oil and aluminium miners while supporting the exploration and processing of new commodities.

“We need to look for new and innovative ways of doing things … but we should always be building on our base,” Mrs Harvey said.

“We must continue to have a focus on new and emerging mining sectors and the growth that they present, such as the battery minerals of lithium, graphite, cobalt, nickel and rare earths.”

In order to achieve that goal, Mrs Harvey said the Environmental Protection Authority regulatory framework would need to be reformed, stating her belief that the agency had adopted an ideological stance towards regulation under the current state government.

“There is a culture of ‘no’ in these agencies where they are consistently more interested in finding reasons to throw up roadblocks that stymie development, rather than look to good regulatory practice to facilitate it,” she said.

“That will change under a government I lead.”

The emphasis on pursuing industries built on WA’s existing strengths extended to criticisms of the state government for its decision to manufacture Transperth's Series C rail cars in WA.

Arguing that the state had no comparative advantage in pursuing such a move, Mrs Harvey said the $50 million committed to build a manufacturing factory could have funded the Department of Mines’ exploration incentive scheme for the next five years, delivering revenue to the state in the process.

“Independent economic analysis by ACIL shows that for every $1 million invested in the exploration incentive scheme, the return to the economy is $23.7 million in net present value terms,” she said.

“That $1 million dollar investment creates [more than] 12 full-time job in minerals exploration for three years, 28 positions for the two-year construction phase of a mine site and [more than] seven jobs for a 13-year production phase.

“Plus it generates over $6 million in payroll tax and royalty revenue.

“Our focus on investment will be on creating long-term, sustainable jobs.”

Though Mrs Harvey focused most of her attention on job creation and deregulation, she also voiced her support for increased spending on tourism through new attractions and growing WA’s share of international students.

She also took the opportunity to endorse The Bureau, a new initiative from Business News that largely mirrors The Lead, a South Australia-based entity that provides positive stories about the state to publications around the world at no cost.

Business News pitched the concept to the McGowan government last year via the market-led proposals policy, but it was ultimately rejected for funding as it was not considered an ‘exclusive’ idea.

Director of strategy and innovation, Mark Pownall, criticised the process in February, arguing The Bureau would be an effective way to attract business investment to WA, given SA Premier Steve Marshall credited The Lead for attracting more than $250 million of investment in space infrastructure to his state.

Mrs Harvey said the evidence suggested the state should pursue any entity that had a proven ability to attract business investment.

“There are a couple of high-profile projects with the Adelaide Space Agency and defence work, but there’s also a lot of private sector investment that’s flooding to South Australia and that’s being credited to The Lead,” she said.

“If that’s something that can work to educate the broader Australian and worldwide business community of the opportunities here in WA, like cheap energy and available industry land, maybe we should look at it.

“The domestic economy is struggling, [and] it shrank by one per cent last financial year.

“We’ve had six quarters of stagnant wage growth, so we need business investment to come to the state.

“I’m up for anything that will attract business investment here.”