Harnessing the power of personality

A Perth food identity is hoping to connect producers and chefs. 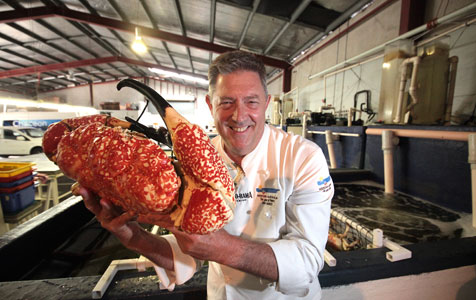 A Perth food identity is hoping to connect producers and chefs.

Don Hancey has always been passionate about supporting local food producers, and now he’s leveraging off his public image for their benefit.

The renowned chef has launched a consultancy offering the Don Hancey ‘signature’ as its major selling point.

The idea is that food producers wanting to market their offerings will go to Mr Hancey for endorsement – potentially increasing the likelihood chefs and restaurants will find a place in their kitchens for local producers’ goods.

“Most producers, because they’re really passionate about their product, spend a lot of time making their product … but they just don’t have time to get it out there into the market,” Mr Hancey told Gusto.

“So they see value in me because I’ve got a really good database and network across the whole of the country, and I know the right people to talk to; if someone wants to get a product in front of a well-known chef, I can do that.”

After negotiating a contract for endorsement, Mr Hancey will advocate the local products to his network, but also during his regular media interviews.

The issue of how to charge producers for a marketing service when they may not have significant capital on hand is vexed.

“I know how hard producers work and I know how much money they don’t make,” Mr Hancey says.

“I understand that they do have it tough, but then I’ve got to have a viable business as well.”

He says the Don Hancey signature isn’t just a sticker on a product’s packaging, but an investment in a long-term relationship where Mr Hancey can help a producer better their business.

And when it comes to product integrity – that’s where a buyer needs to have faith in Mr Hancey’s reputation.

“The product has to be of quality, it’s got to have integrity at its core,” Mr Hancey says.

“And integrity not only in the actual product, but with everything behind it. I don’t want to be promoting Mrs McGregor’s macadamia nuts if they’re pouring heaps of chemicals on the trees to make them grow.”

Founding a business based on the commercial advantage of personal image requires a certain level of ego, and while Mr Hancey unquestionably wants to make money from the consultancy, there’s a deeper motivation to support the Western Australian economy.

“To me it’s important to get the message out there that if you buy local you’re not only just supporting that producer, but they might live in a small community, so that money helps that small community grow,” Mr Hancey says.

Mr Hancey started his career in restaurants in the South West, but soon found himself developing grander plans

“Owning a restaurant is like having a party in your lounge room every night,” Mr Hancey says of the early years, and in explanation of his subsequent decision to start Panorama Catering in Perth.

Panorama has enjoyed a diverse range of clients, including BHP Billiton in the corporate sector.

That business is still in operation, but Mr Hancey says he wanted to push more into the festival market where advocating local production of goods was more plausible, which he started doing years ago off his own bat.

“The last three or four years I’ve been heading that way without an actual goal; it was something I was passionate about and then someone coined the term ‘WA Food Ambassador’,” he says.

Mr Hancey already has a handful of clients on his books, including an agreement with Fremantle fisherman Jim Mendolia to market his range of tinned sardines.

Bullsbrook-based Farmland Greens has also signed up for help distributing its range of sprouts and shoots, and work is also being undertaken with retail fish and chips supplier Sweetlips.