Hardie ducks line up on Roe

Redevelopment plans for a prominent Northbridge property have been resurrected as the City Link breathes new life into land on the city’s northern fringe. 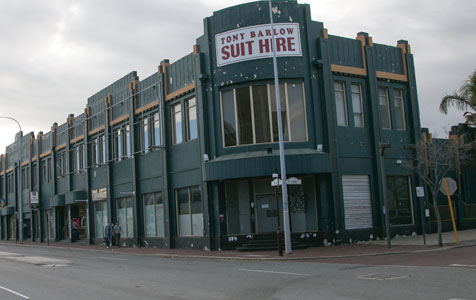 Redevelopment plans for a prominent Northbridge property have been resurrected as the City Link breathes new life into land on the city's northern fringe.

Northbridge hotelier Graham Hardie is finalising plans for a block in Roe Street almost three decades after he bought the landholding that extends from Lake Street to Milligan Street on the city’s northern fringe.

Mr Hardie secured development approval for the property back in 2009 but the plans never got beyond blueprints. Now, four years down the track, the idea for the site has significantly shifted.

The land will still support a 20,000 square metre office development, but Mr Hardie has added a substantial retail element to capture the pedestrians expected to use the planned Shafto Lane crossover through City Link.

This connection will link the CBD with a point almost in the centre of Mr Hardie’s landholding and he’s keen to take advantage of this pedestrian traffic.

The retail component of the project will total about 5,000sqm and Mr Hardie said one of the major supermarket operators was “very keen” to anchor it.

“Retail just wasn’t an option in 2009 because the railway wasn’t confirmed to be sunk, and at that stage office was far more valuable,” Mr Hardie told Business News.

“It’s a different (office) market than it was a year ago but … we have been approached by some major tenants who are looking for space with large floor plates.”

Mr Hardie is hopeful his plans for the new development will be completed within months; and he’s not the only landowner in Northbridge keen to capitalise on the transformative power of the City Link project.

Northbridge-based planning group, the Rowe Group, has received a significant number of inquiries from landowners interested in redeveloping sites in the near-city suburb, including office, retail and residential projects.

“I don’t think people realise how big an impact the City Link will have on Northbridge,” Mr Hardie said.

“The Perth Arena has already had an amazing effect on the city side… and I think the link will have the same effect the America’s Cup had on Fremantle (on Northbridge).”

Mr Hardie’s association with Northbridge dates back to the 1970s and he still runs the Library Nightclub, Paramount Nightclub and the Varga Lounge in the suburb’s nightlife precinct.

As well as his hospitality interests, Mr Hardie built the James Apartments next to Rosie O’Grady’s on his adjoining landholding.

This latest proposal encompasses the Tony Barlow property and the adjoining markets site.

The Community News building on the corner of Milligan Street will also be refurbished and support about 4,700sqm of office space.

And there’s more activity slated for the area in the near future, as the state government works on its promise to invest $2 million revitalising the Chinatown laneways.

Details of how this money will be invested have not been released but its understood an announcement is imminent.

The precinct is in poor condition rundown compared with the vibrant Sydney and Melbourne Chinatowns. Sources in the Northbridge community suggest disagreement between the different private landowners in the precinct have hampered attempts to clean it up

The project is now in the hands of the state government’s powerful Metropolitan Redevelopment Authority as well as the City of Perth.

One Northbridge community member said the sinking of the railway line and the construction of first buildings in the City Link would hopefully convince a number of the Chinatown landlords that the time was right to invest.

Duncan Calder is the WA president for the Australia China Business Council and a strong advocate for closer cultural ties between the two countries.

Mr Calder said it was vital we fostered closer links with our major trading partner and greater investment in Chinatown was a great place to start.

“Initiatives like upgrading China Town to complement the excellent Chinese New Year Fair in Northbridge can only be positive for our friendship and our business relationships,” he said.