Hammer Metals is gearing up to kick off its maiden drill program at the Bronzewing South gold project in Western Australia over several targets that are located immediately south and along strike of Echo Resources’ 4 million ounce Bronzewing mine. A recent survey over these targets identified conductive zones that are in most cases spatially associated with areas of higher gold accumulation anomalies in historical drilling. 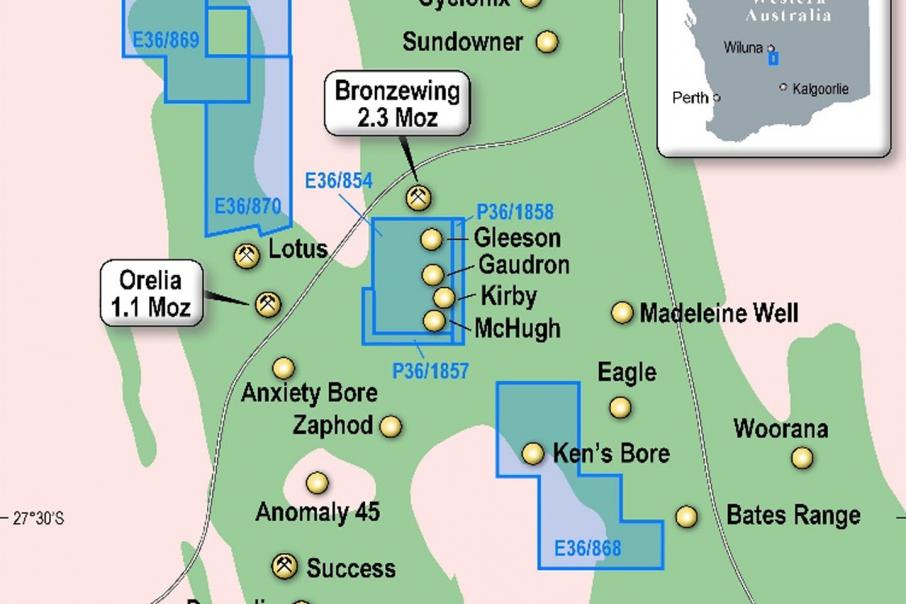 Hammer Metals is gearing up to start its maiden drilling program at the Bronzewing South gold project in Western Australia with a reverse circulation rig now mobilising to site.

The preliminary program of 2,500 metres of drilling will assess several targets generated from Hammer’s structural analysis and assessment of the historical geochemical data and new geophysical data.

Notably, these targets are located immediately south and along strike from Echo Resources’ 4 million ounce Bronzewing gold mine.

A recent induced polarisation survey carried out over these targets identified conductive zones that are in most cases, spatially associated with areas of higher gold accumulation.

Gravity survey data acquired during the quarter has also aided in the interpretation of the sub-surface structure, geology and alteration of a series of northeast trending structures that are believed to be one of the controls on the gold mineralisation at the neighbouring Bronzewing deposit.

Additional conductivity and induced polarisation features have also been identified in positions peripheral to the main mineralised trends that will require further evaluation.

Hammer Chairman Russell Davis said: “This program represents Hammer’s first step towards testing a range of gold targets the company has started to generate in what we consider a very prospective part of the Yandal Greenstone Belt.”

Bronzewing South was acquired earlier this year and is directly adjacent to existing infrastructure, including Echo’s 2 million tonne per annum Bronzewing processing plant, which is currently on care and maintenance.

Despite this, the project area is relatively underexplored due to the transported cover that conceals the geology beneath and ranges in thickness from 2m to 40m.