ASX-listed Hammer Metals has picked up $150,000 from the West Australian Government’s Exploration Incentive Scheme to test a compelling gravity and structural target at its Bronzewing South Gold project, located 50kms northeast of Leinster. The grant will partly fund the drilling of the deeper gravity targets around Bronzewing south, whilst drilling is also set to resume at the shallow North Orelia Target. 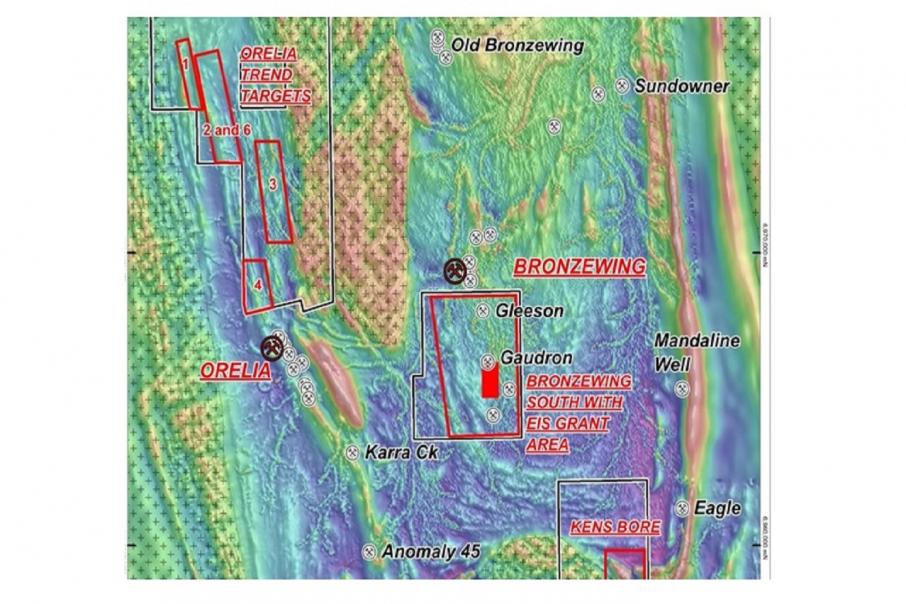 ASX-listed Hammer Metals has picked up $150,000 from the West Australian Government’s Exploration Incentive Scheme to test a compelling gravity and structural prospect at its Bronzewing South Gold project, located 50kms northeast of Leinster.  The grant will partly fund the drilling of the deeper gravity targets around Bronzewing south, whilst drilling is set to resume at the shallow North Orelia Target.

This is the second such grant locked down for Hammer by Managing Director, Dan Thomas, who was only appointed in October last year.  The first was a $283,00 grant from the QLD Government early this year to help fund some diamond drilling at the company’s Mt Isa project.

Hammer’s technical team has now finished its interpretation of a recently completed gravity survey at Bronzewing South and a number of anomalous gravity lows have been identified.  The company said the anomalies had analogous geological features to the existing Bronzewing deposit.

These gravity lows lie beneath shallow gold mineralisation intersected previously by Hammer and also by other historical explorers.  Historical RC drilling by Hammer at the edges of the gravity lows showed a 10m intersection grading 1.97g/t gold from 129m down hole, including 1m at 16g/t from 137m.

The company said the WA Government grant will partly fund diamond drill testing of the mineralisation model interpreted from these gravity lows.  It expects the diamond drill program will follow the completion of the aircore and RC drill testing at Orelia and the nearby Kens Bore target.

At North Orelia, Hammer is targeting a recommencement of aircore drilling operations along the Orelia trend in mid-June after a three-month suspension due to COVID-19 restrictions.

The company is just over half way through a 10,000m air core drilling program of targets around its Orelia and Bronzewing South gold projects that are located approximately 50kms northeast of Leinster.

Hammer has already doubled the strike length of its North Orelia gold target in WA’s Eastern Goldfields, with the latest drill results identifying significant areas of shallow gold mineralisation over a strike of 2km.

North Orelia is just one of Hammer’s string of pearls along a 20km trend adjacent to the 2.3Moz Bronzewing gold mine and the 1.1Moz Orelia gold mine.  Other pearls include the historic Lotus, Cockburn, Success and Parmelia deposits that were mined between 1992 and 2010.  The Lotus pit, which is closest to North Orelia, produced 400,000 ounces during this period, according to Hammer.

Whilst the company is already sitting on a healthy resource at Orelia, management said the mineralised zone is still open in all directions.

North Orelia and Bronzewing South are slotted beautifully into the tier-one gold mining district that extends between Wiluna in the north and Kalgoorlie to the south.

Hammer Metals Managing Director, Daniel Thomas said: “The quality of exploration targets within Hammer’s portfolio continues to be recognised and rewarded as evidenced by our successful funding applications to various state governments. The grant will enable deeper drill-testing for a potential repetition of the Bronzewing Deposit within Hammer tenements.”