Hammer Metals has made its best ever intercept of 41 metres @ 0.18% cobalt, 0.11g/t gold and 0.23% copper from 14m down-hole representing the true width of the mineralisation at the Millennium project near Cloncurry in QLD. Drill results will now be reviewed before carrying out further exploration on the higher grade southern portion of the resource ahead of preliminary metallurgical studies. 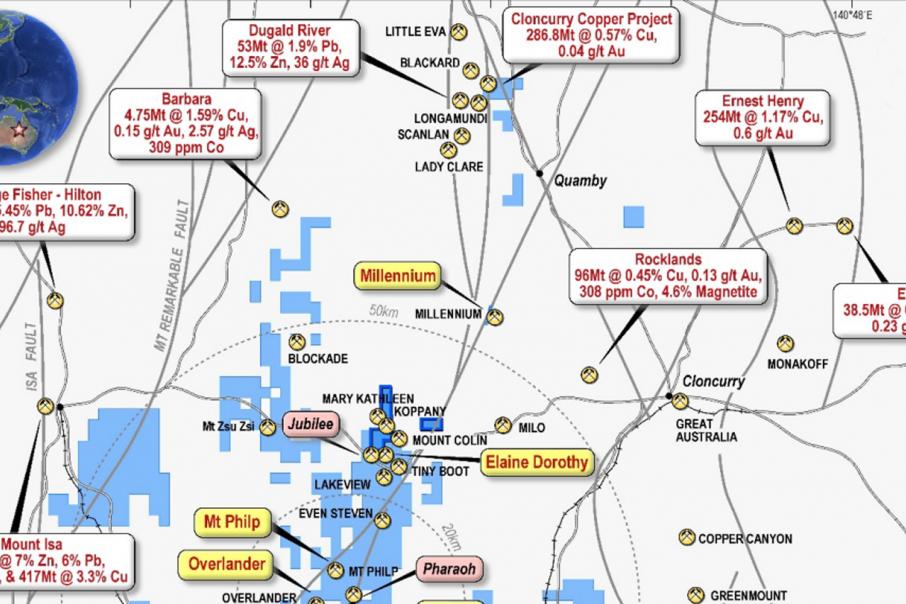 Hammer Metals has reported some excellent, near surface cobalt drill intercepts that lay bare the battery metals potential of its Millennium JV near Cloncurry in Queensland’s Mt Isa mining district.

The best intercept was a serious 41 metres at a very respectable 0.18% cobalt with a solid grab bag of gold and copper credits going 0.11 grams per tonne gold and 0.23% copper

According to the company, the result represents the true width of the mineralisation.

The drilling has successfully tested the up-dip continuity of the cobalt-copper mineralisation at the northern end of the Millennium deposit.

Hammer will now review the results of the program before carrying out additional drilling on the higher grade southern portion of the resource ahead of preliminary metallurgical studies.

The company said in an ASX market update earlier this month that it would commence updating the mineral resource estimate at the Millennium JV project soon.

It is less than 20km from CuDeco’s Rocklands copper project, which held a pre-mining resource of 96 million tonnes grading 0.45% copper, 0.13g/t gold and 0.03% cobalt in multiple lodes within an iron oxide copper gold ore deposit.

The deposit is similar in size and style to other deposits in the region that have been successfully mined by small-scale open pit techniques.

Cobalt prices have more than doubled since the start of last year and a tonne of the battery metal is now selling for around US$80,000.

At those levels, a tonne of dirt that contains just 0.1% cobalt is worth around USD$$80.

A tonne of dirt that contains one gram of gold is worth half that figure at about USD$40 a gram which makes doing the gold/cobalt comparisons quite fun.