Hammer Metals’ strategic review of the rare earth element potential of its Mount Isa project in Queensland has delineated two encouraging prospects for follow up work. Light rare earth element prospectivity was highlighted at the Koppany prospect near the historical Mary Kathleen uranium mine and Andy’s Well prospect adjacent to the Kalman project, a further 35 kilometres to the southwest. 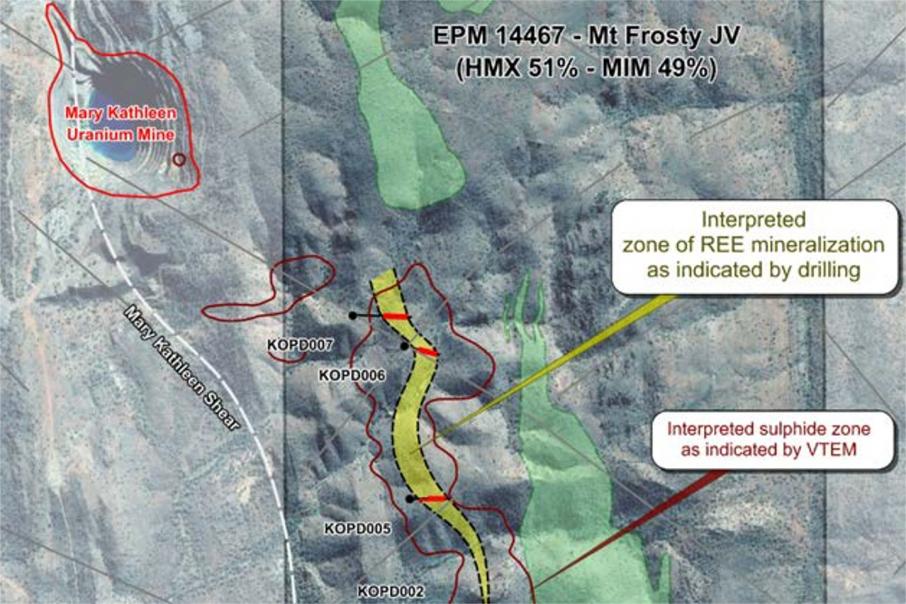 Multi-commodity exploration company, Hammer Metals, has dusted off its comprehensive technical data set for the Mount Isa project in Queensland and delineated two encouraging prospects during a strategic review of the region’s rare earth element, or “REE”, potential.

Prospectivity for light REEs such as cerium, lanthanum, neodymium and praseodymium was confirmed at the Koppany prospect near the historical Mary Kathleen uranium mine and Andy’s Well prospect adjacent to the Kalman project, 35km to the southwest.

According to the company, multiple greenfields targets for REE were also uncovered elsewhere in the existing data sets.

The anomalous results derived from exploratory diamond drilling at the Koppany prospect are particularly intriguing as the area is directly along strike from the Mary Kathleen mine, where significant quantities of REE are known to occur but never recovered, during the mining operations that concluded there in 1982.

Although REEs were not specifically targeted at Koppany, significant widths of the mineralisation were recorded from drilling at the prospect.

Koppany is part of the company’s Mt Frosty JV ground, held 51% by Hammer and 49% by Mount Isa Mines.

At Andy’s Hill, broad widths of massive magnetite and disseminated copper and REE mineralisation were intersected during a 2015 drill program testing the iron oxide-copper-gold, or “IOCG”, potential of the prospect area.

Management said that a full assessment of Andy’s Well drilling data for REE potential is underway and will be reported when complete.

Hammer Chairman Russell Davis said: Whilst Hammer’s exploration at Mount Isa is focussed on copper and gold there is definite potential for REE’s in our extensive tenement package, and the company will investigate ways to assess and maximise the value of this potential for our shareholders. The Koppany prospect near Mary Kathleen is of particular interest.”

The light REE neodymium and praseodymium are the key ingredients in the manufacture of strong, permanent magnets used in high-efficiency electric motors and the expanding electric vehicle sector.

Recent trade disputes between China and the US have highlighted the strategic, critical importance of a rare earth element supply outside of China, who currently controls about 80% of the global world production of these commodities.

The US imports some USD$160b of these materials annually from China, so any choking of this supply opens up opportunities for other countries to reconsider their REE deposits for potential economic extraction.

Lynas Corporation’s Mt Weld rare earth operation near Laverton, WA, has been a major beneficiary of the recent trade dispute, with that company’s share price rising 75% in the last 12 months.

The sharp increase has also allowed Lynas to fend off a recent hostile, all-scrip takeover bid from Wesfarmers for its assets.

Australia is well-placed to capitalise on the current uncertainty of REE supplies globally and Hammer has picked up on the sentiment and is now running the ruler over its anomalous REE assay drilling results from several prospects in the Mount Isa district.

It will be interesting to see what the company unearths here as it completes a strategic review of the REE potential of its ground holdings in Queensland.