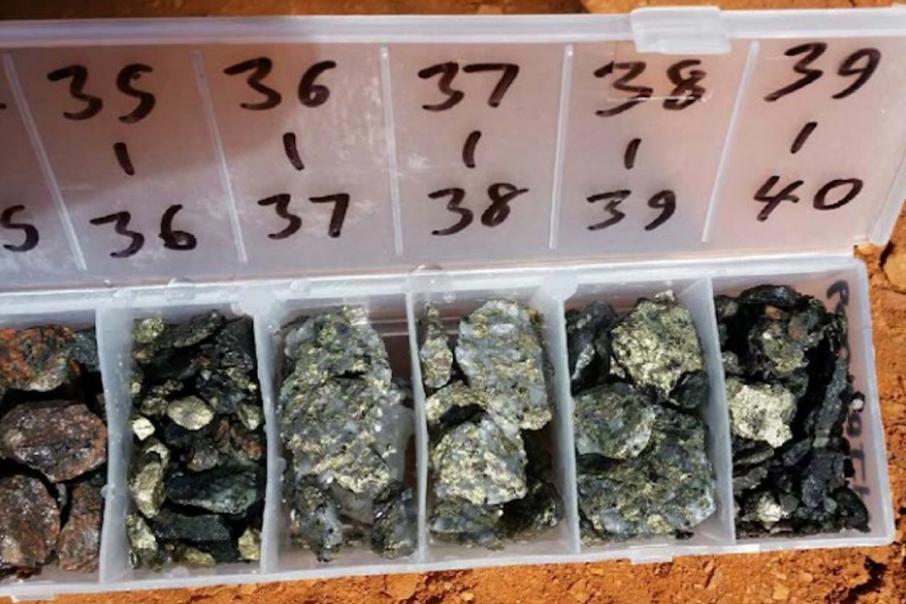 Drilling by Hammer Metals at the new Mt Frosty joint venture with Glencore is off to a good start, with several intersections of visible sulphides indicating Hammer may be onto a copper system. The Copper mineral Chalcopyrite was also present in the samples.

The Mt Isa-focused explorer told the ASX it had completed nine RC holes in the first phase of a maiden drilling program at the Jubilee prospect in the Mt Frosty joint venture, which is targeting Copper and Gold.

One drill hole encountered sulphides over an 8 metre mineralised section from 60m down hole and the other was a 7m intersection from just 33m down hole.

Mt Frosty is adjacent to the old Mary Kathleen Uranium mine, 60km east of Mt Isa and is being explored under a newly-formed, 51%/49% joint venture between Hammer and global mining giant Glencore.

Hammer reported that several intersections showed visible sulphide mineralisation from shallow depths, including the Copper sulphide Chalcopyrite. Assay results due back in three or four weeks will reveal the grade and full significance of the new drill hits.

Hammer believes AuKing’s results suggest excellent potential to delineate a shallow copper-gold resource at Jubilee with minimal infill drilling and this week’s early drill results go some of the way towards supporting that theory.

The RC rig has moved on from Jubilee to drill up to three holes at Hammer’s Millennium copper-cobalt deposit, about 25kms northeast. The company aims to bring the rig back to Jubilee to begin a second phase of drilling before the end of the month.

Shareholders can expect a steady flow of drill results from a number of programs now. Follow-up RC drilling recently got underway at 100 per cent owned targets Kalman West and Hammertime, while drilling is also planned at Serendipity, Pharaoh East and Elaine in the current quarter.

Hammer Metals is operating in an area that encompasses Australia’s largest copper producing region, boasting the largest silver mine on the planet and 30 per cent of the world’s lead and zinc reserves.

Hammer Metals CEO and Director, Alex Hewlett, said  “We think there is an amazing opportunity for a small company like ourselves. We’ve grown a large landholding in the area, with 3000km2. Our sole focus is to make copper-gold, base metal discoveries in this area. We are surrounded by a lot of large companies with a lot of infrastructure in place and we think that a discovery in this area would be hugely meaningful for our shareholders,”

The lead project within the Hammer/Glencore joint venture is the Jubilee deposit, where Hammer is drilling to define a copper gold resource.

The JV ground is sitting quite close to the Barkly Highway, which is ideally located from an infrastructure point of view.

Copper prices have been buoyant in the second half of 2017, rising 19 per cent in six months to $US2.97 yesterday, which is  good news for Hammer as they approach years end.

Mr Hewlett said, “If there is one message I could give to investors it is that we are incredibly leveraged to the price of copper. We have an absolutely amazing tier one portfolio of copper projects and as we continue to see strength in the copper price, Hammer is exceptionally well positioned to be able to take advantage of that,”