Hammer Metals has completed the sale of its 75% interest in the Millennium cobalt project near Cloncurry, Queensland, to Canadian partner Global Energy Metals Corporation. The company will now focus on its copper-gold projects in the Mount Isa mining district and the Bronzewing South gold project in Western Australia while retaining exposure to the cobalt projects through a 19.9% stake in GEMC. 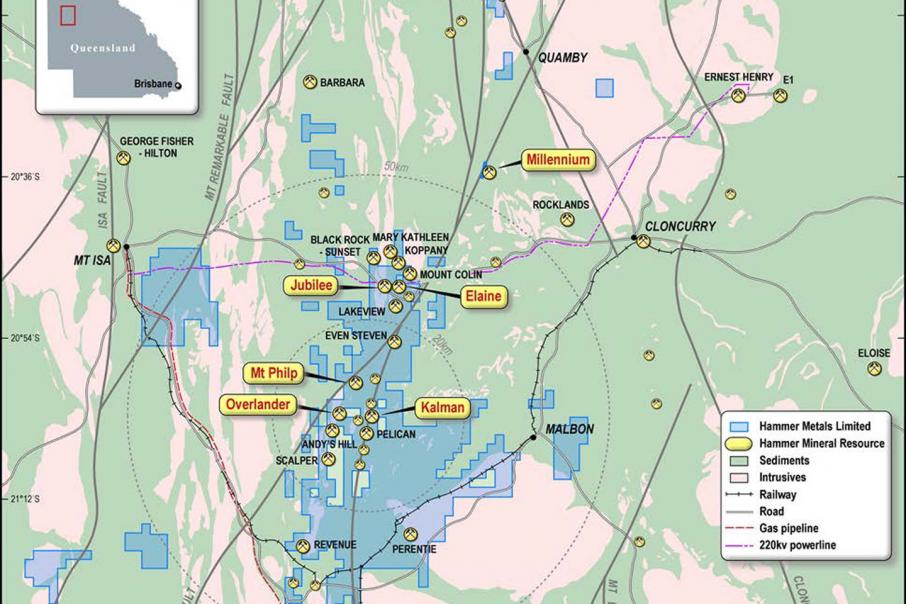 Hammer Metals will now focus on its copper-gold projects in Queensland’s Mount Isa mining district after completing the sale of its 75% interest in the Millennium cobalt project near Cloncurry to TSX-listed partner Global Energy Metals Corporation, or “GEMC”.

In return for its stake in Millennium and the Mt Dorothy and Cobalt Ridge targets, the company has received 19,255,641 GEMC shares, which represents a 19.9% stakeholding in the Canadian company.

This stake grants Hammer the right to appoint one director to GEMC’s board and retain significant exposure to the cobalt projects.

Hammer will also remain the operator of Millennium until at least the first anniversary of the sale agreement.

Millennium is less than 20km from CuDeco’s Rocklands copper project and is of similar size and style to other deposits in the region that have been successfully mined by small-scale open pit operators.

Further resource and extensional drilling is planned for later this year.

GEMC is also developing the Werner Lake cobalt project in Ontario, Canada, and has the option to acquire an 85% interest in both the Lovelock Mine and Treasure Box projects in Nevada.

Hammer chairman Russell Davis said: “We are very pleased to have the opportunity to have a significant interest in a focussed cobalt explorer and developer while retaining exposure to longer-term value creation that the Millennium deposit and the other Mount Isa cobalt projects will offer.”

“The sale to a focussed cobalt company in GEMC will allow Hammer to concentrate on its other advanced copper-gold exploration programs within its 2000 square km tenement package in the Mount Isa mining district as well as the recently acquired Bronzewing South gold project where we are commencing field work.”

Recent activity in the company’s Mount Isa copper-gold projects has also been fruitful with rock chip sampling at the Malbon project returning 99.4 grams per tonne gold and 1.63% copper from iron-rich quartz veining upstream from the historical El Questro alluvial workings.

Field work has also started at the Mt Philp Breccia project about 45km west of Malbon.