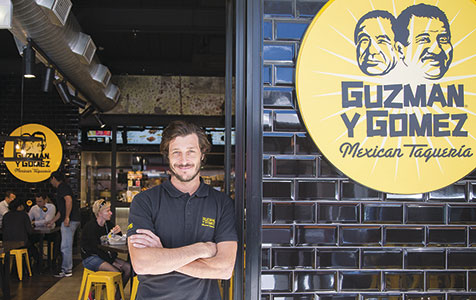 Yet another Mexican restaurant is set to open on what is fast becoming Perth’s Mexican mile – Beaufort Street.

But despite the competition, the Western Australian manager of national fast-food chain, Guzman y Gomez, claims its restaurants are putting to shame others offering similar fare.

“If I can be so bold, I don’t think the other Mexican restaurants hold a candle to what we offer,” Courtney Smith told Business News.

“Once people try what we do, I’m confident that they’ll come over the choice of others.”

Guzman y Gomez is the latest the Mexican chains establishing a WA presence – it opened its first outlet in Northbridge just over a year ago.

Its expansion with the opening of a second outlet in Mount Lawley, planned for July, comes nearly two and a half years after competitor Zambrero opened just 100 metres away.

Zambrero was founded in 2005 by medical doctor Sam Prince, who was named the Australian Capital Territory’s Young Australian of the Year in 2012.

The business entered the WA market with its first outlet in Leederville in 2011 and now has nine across Perth.

It has a strong not-for-profit angle – for every meal sold Zambrero donates funds to enable international organisation Stop Hunger Meal to provide one meal in the world’s most vulnerable communities.

The next Mexican joint to open in Mt Lawley was El Publico in April 2012 followed by the Panchos Mexican Villa just across the road in 2013.

Salsa is on an aggressive expansion strategy after it was bought by the company that also owns Boost Juice, Retail Zoo. It now has eight outlets in Perth.

Despite the fact that Mount Lawley’s four Mexican restaurants trade within a five-minute walk of each other, Mr Smith says the Guzman y Gomez style of service would set it apart.

Mr Smith describes this as “fast casual dining”, where customers order at the counter but receive food at their table.

“The easiest way to describe it is that you get restaurant quality food, quickly,” he said.

Mr Smith has significant experience with establishing and running hospitality venues internationally and in Perth since arriving in 2002, including involvement with The Boulevard Hotel and The Brisbane.

He and three business partners became master franchisors for the Guzman y Gomez chain, which was established by New Yorker Steven Marks in 2006.

Shareholders of the parent company include managing director of Kmart and former McDonald’s executive, Guy Russo.

Mr Smith said the opportunity to capture market share with the fast casual dining style of service was too attractive to ignore.

“A lot of that (style of service) happens in North America where I’m from and you just don’t see it as much here,” Mr Smith said.

“What people get blown away with by us is that our service level is high – there’s knowledge by the staff of what they’re serving and there’s also a dedication to serving customers.

“To be in the service industry you need to have a genuine desire to serve, if you don’t then you shouldn’t be there.”

Mr Smith said he had been contemplating the potential of the Mount Lawley site for about two years and negotiations were also under way for additional restaurants outside of metropolitan Perth.

“The idea was always to create the brand awareness through the higher density areas, but we’re not in a rush to expand at a frenetic pace,” he said.

Mr Smith said the slow and steady approach allowed him to be involved with each new restaurant to ensure it was run well, met the brand’s standards, and made a profit.