Ian Hutchinson reckons any foodie worth their salt should be down at his beachfront restaurant and microbrewery at North Fremantle. Carolyn Herbert reports. 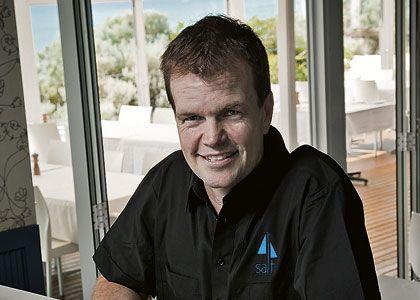 GOT IT ALL: Ian Hutchinson says Salt on the Beach boasts a fine-dining restaurant, a casual dining area, a beach bar, a kiosk and a microbrewery, right on the oceanfront. Photos: Grant Currall

Ian Hutchinson reckons any foodie worth their salt should be down at his beachfront restaurant and microbrewery at North Fremantle. Carolyn Herbert reports.

IT was almost two years ago that financial planner Ian Hutchinson made the decision to swap his tie and briefcase for food, beer, and the beach.

Even during his career in the banking and finance industry, Salt on the Beach co-owner Mr Hutchinson says he always had a passion for hospitality and was involved in the restaurant business from an early age.

“When I was younger my mother was one of the pioneers in the hospitality and catering industry,” Mr Hutchinson told Gusto.

“Her name is Heather Hutchinson; she had a restaurant called Heather’s Hutch in Nedlands, it was an institution at the time and had the first coffee machine outside of Fremantle … it was 20 years ahead of its time.”

But Mr Hutchinson’s mother isn’t the only hospitality veteran in the family; brother Craig ‘Hutchie’ Hutchinson owns and manages numerous pubs and clubs around Perth, including The Garden, The Leederville and the Claremont Hotel.

Mr Hutchinson told Gusto that it was ‘Hutchie’ who asked him to become a business partner in Salt on the Beach at North Fremantle, which was bought from restaurateur Warren Mead in 2007.

At the time, Mr Hutchinson was working as a financial planner for a bank, but he says fond memories of working in bars and restaurants in Europe during his 20s prompted him to give the industry another shot.

“For me, it was definitely that love of hospitality, and as soon as I came down here I knew I wanted to swap that suit and working in the city for the sea,” he says.

“My brother and his business partner ran it for a few years but it’s such a big place you really need a manager/owner so that’s where I came into it; I run the business on a day-to-day basis now.”

Located at Leighton Beach, Salt on the Beach boasts a fine-dining restaurant, a casual dining area, a beach bar, a kiosk and a microbrewery, not to mention uninterrupted views of the Indian Ocean.

Mr Hutchinson says the on-site microbrewery, the Black Salt Brewery, has been a hit with patrons.

He claims the 30 square metre Black Salt Brewery is the most award-winning brewery of its size in the world.

“We make 300 litres of beer at a time and there are no preservatives; in the last two years we have won five international silver medals in Melbourne and there are certainly no small brewers that match that,” Mr Hutchinson says.

In addition, the venue has its own playground to encourage a family friendly environment.

“Being a father, that’s one of my big pushes; so not only do you have couples that can come down here and enjoy the sunset, families can as well,” Mr Hutchinson says.

So far, Mr Hutchinson says he is enjoying running a restaurant and has found a good crossover for his banking skills.

“It’s good having that financial planning and the numbers background, because there are a lot of great restaurateurs who go broke because people don’t manage the numbers too well,” he says.

But staffing and marketing continue to be ongoing challenges.

“When it comes to wait and bar staff we are at the bottom of the food chain; our kitchen runs really well because we have a great head chef so we are really lucky in that respect,” Mr Hutchinson says.

“The attitude of Gen Ys can be a problem, it’s a supply and demand thing; if it’s all too hard they can just get one of the eight other jobs that are on offer or work on the mines, so finding career-minded people who are conscientious and have attention to detail is really rare.”

In addition, increasing Salt on the Beach’s profile via advertising campaigns has taken time to gather momentum.

“Often people drive past and just see a kiosk out the front, they don’t know we are here, so it’s about getting known somehow without spending a fortune on advertising, because margins are very small in hospitality,” Mr Hutchinson says.

“We are in the ‘Entertainment Book’, which is good for us, but advertising in the papers hasn’t been very good for us, so we just have to do our best to provide good service, good food and build up that word of mouth.”

Mr Hutchinson says one of his main focuses is growing the functions side of the business and further promoting the venue to corporate firms in town.

“We can seat around 1,500 people in the whole venue and people can have a drink, kick their shoes off and walk down to the beach; what better way to spend your work Christmas party?”