Great Southern to kick off drilling at WA gold play

Great Southern Mining will kick off its maiden drill program at the historical, high-grade Cox’s Find gold project near Laverton in WA, that churned out 76,000 ounces grading 22.6g/t gold for previous owner, WMC, some 80 years ago. The campaign represents the first exploratory work in 25 years, with the first drilling of any kind below 60m depth and aims to discover substantial new gold resources. 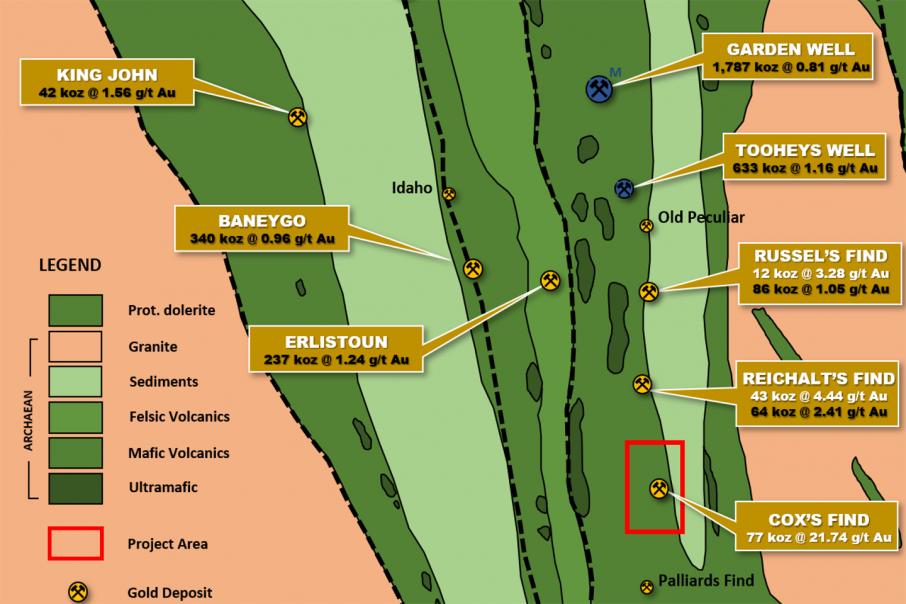 Multi-commodity explorer, Great Southern Mining, is set to kick off its maiden exploration drill program at the prospective and underexplored Cox’s Find gold project, 65km north of Laverton in the northern Goldfields region of WA.

The historical open pit and underground mining operation once churned out just under 76,000 ounces grading an incredible 22.6g/t gold for WMC and would not be the first ex-WMC asset to rise like a phoenix for a new owner.

The company acquired a 100% interest in three granted mining leases at Cox’s Find back in August, for $200,000 in cash and $1.8m in deferred payments at specific milestones, including the definition of at least 500,000 ounces in a JORC-compliant mineral resource.

Great Southern will also pay the vendor a 1.5% net smelter royalty on future gold production from the leases.

The company’s Phase 1 drilling program will consist of up to 2,000m of mixed RC and diamond drilling, aimed at testing new predictive 3D geological structural models with a view to extending the delineated high-grade gold mineralisation beyond the current mine workings.

The primary objective is to discover a substantial new gold resource at Cox’s Find to underpin the recent acquisition and if successful, rapidly accelerate the project to operating status, taking advantage of the current robust gold prices.

The upcoming drill campaign represents the first exploratory work in a quarter-century and the first drilling of any kind below 60m depth, which just might add a touch of excitement this obviously high-grade region.

Cox’s Find is located in a world-class mining district, along strike from and in close proximity to, Regis Resources’ multi-million ounce Garden Well discovery, identified in 2008.

The project is also located close to other gold operations and excellent infrastructure, including several mills that might be suitable for toll treating if required.

Great Southern Executive Chairman John Terpu said: "The exploration team … have built a 3D model for the project which has been used to guide this phase of drilling. The process involved collating over 80 years of historical production, exploration and technical data which has shed new light on the potential for this project.”

“The 3D model demonstrates that Cox’s Find is an exceptional opportunity for exploration and resource growth of an old high-grade gold mine. The drilling will enable us to gauge the potential size and viability of the deposit with potential near-term production scenarios given its proximity to several significant processing facilities and infrastructure.”

Great Southern recently commissioned a drone survey to accurately define the volumes of the gold-bearing surface materials still on-site at the project.

These include stockpiles of primary gold mineralisation that have an average grade of 1.7g/t gold, heap leaching pads with an average grade of 1.3g/t gold and historical “waste dump” materials that were put aside in the 1940s, at a time when 12g/t gold ores were deemed too low grade to mine or process.

How times have changed.

The company is now in the process of obtaining the necessary technical information it needs to provide a JORC-compliant evaluation of these leftover, gold-bearing ores on-site at Cox’s Find.

However, the real prize is what can be gleaned from the pending drill programs and affords Great Southern the opportunity to apply some real 21st Century know-how to the considerable and undoubted, blue-sky exploration potential at this exciting project.

To back this up, the company said its drilling will target several historically identified and untested, bonanza-grade quartz reefs at Cox’s Find, that were delineated in underground development drives, but never extracted or drill-tested further.

Just what the folks at WMC left behind at this historical gold operation is unknown, but what is well known is that WMC left economic resources strewn across a labyrinth of projects in WA a couple of decades ago and this would not be the first of its old projects to ride again.

Given Cox’s Find historical pedigree as an ultra-high-grade play, it may not be out of the question for it to still be harbouring a jeweller’s cave that could possibly turn out to be a company maker for Great Southern