Great Southern Mining has stepped on the gas and will fast-track a program of infill and extensional drilling at its emerging Mon Ami gold project near Laverton in the north eastern Goldfields region of WA. The work aims to rapidly expand the current 59,000 ounce resource by drilling down-dip to the west, down-plunge to the north and along strike up to 1km south of the existing resource. 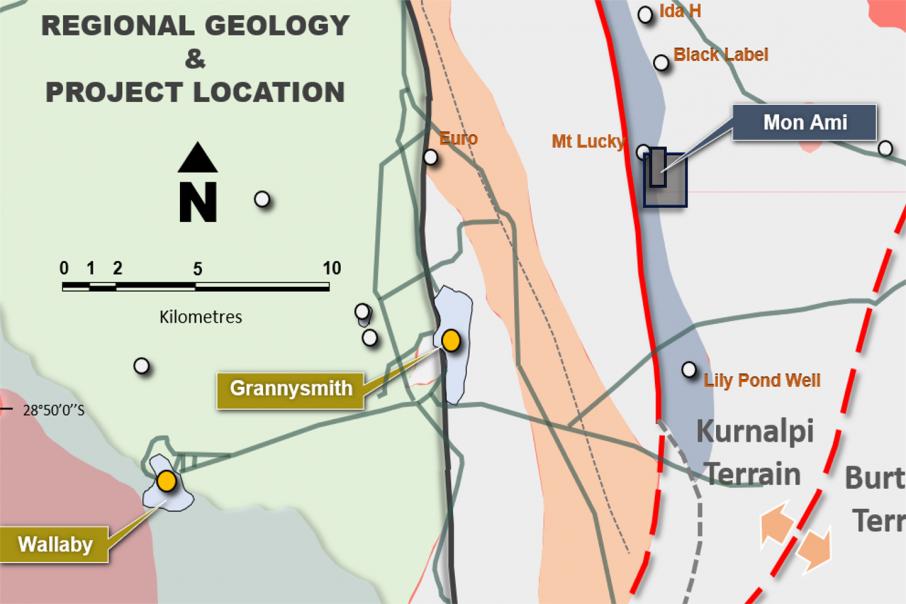 Junior multi-commodity exploration company Great Southern Mining has stepped on the gas and will accelerate of a program of infill and extensional drilling at its emerging Mon Ami gold project near Laverton in the north eastern Goldfields region of WA.

Back in November, the company announced its maiden mineral resource of 1.1 million tonnes grading 1.7g/t gold for 59,000 ounces, but those numbers do not take into account mineralisation below a depth of 150m or potential down-plunge extensions adjacent to the regional Barnicoat shear zone.

The company will throw the kitchen sink at the project over the next few months, with 20,000 metres of RC and diamond drilling planned in 120 holes.

The work aims to rapidly add ounces to the current inferred resource by extending drill coverage down-dip to the west, down-plunge to the north and along strike, up to 1km further south.

About 80% of the drilling is concentrated on the existing resource area at Mon Ami and will help increase understanding in the company’s geological interpretation and confidence in the gold distribution.

The remaining 20% of the work will be on greenfields exploratory targets.

The company is planning to update the mineral resource estimate for the project at the end of the June quarter, by which time all the assay data will have been received and the new geological interpretations will have been completed.

Great Southern Executive Chairman, John Terpu said: “We're excited to resume drilling on the Mon Ami gold deposit and to be testing the continuity of the mineralisation along strike and to depth. Our highly successful Phase 1 programme intersected very consistent mineralisation throughout each hole and the current resource provides a very robust base to build from.”

“The … Phase 2 drilling programme is budgeted for at least 20,000m with 80% of the programme dedicated to expanding and upgrading the current resource estimate … and 20% allocated to exploration drilling outside of the resource area.”

“Given the geographical compatibility of the deposit to a number of operating mills within 25km-50km, the extensional and infill drilling will assist in maximising the potential of the deposit and allow us to continue to examine potential development scenarios.”

The company has drawn parallels between its Mon Ami gold deposit and the historical Ida H mine, located about 6km to the north.

That deposit started life as a small-scale 50,000 ounce open-pit gold mine but quickly progressed into an underground development down-plunge that spat out a further 172,000 gold ounces at an incredible grade of 22.6g/t gold.

The mine was developed to about 480m below the natural surface.

Great Southern would take that scenario playing out at Mon Ami in a heartbeat with the current gold prices near AUD$1870 per ounce.

As a potential signpost to Mon Ami’s prospectivity, artisanal, small-scale underground mining of “high-grade quartz reefs” at the property produced 311 ounces of gold at an ounce and a half to the tonne in the early 1900s.

Great Southern’s exploration target for Mon Ami ranges from 200,000-250,000 gold ounces, depending on what gold cut-off grade is used.

The company has established itself at a wonderful postcode, surrounded by behemoths such as Sunrise Dam and Wallaby, which contain 25 million ounces of gold between them and are potential customers for Great Southern’s future ore stream from the project.

Given the proximity of Mon Ami to existing mills and infrastructure, the recent encouraging metallurgical results also demonstrate that the deposit has excellent potential for further development opportunities and future mining studies.

2019 is shaping up to be a defining year for Great Southern, as it seeks to expand the Mon Ami gold resources via definition drilling and to potentially monetise the project down the track.