Great Southern Mining has racked up another successful exploration program at its Edinburgh Park Project in north Queensland, with a recently acquired hyperspectral dataset lighting up a litany of interpreted geochemical footprints of mineralised porphyry, epithermal gold-silver and intrusive related copper-gold and multi-metals systems. 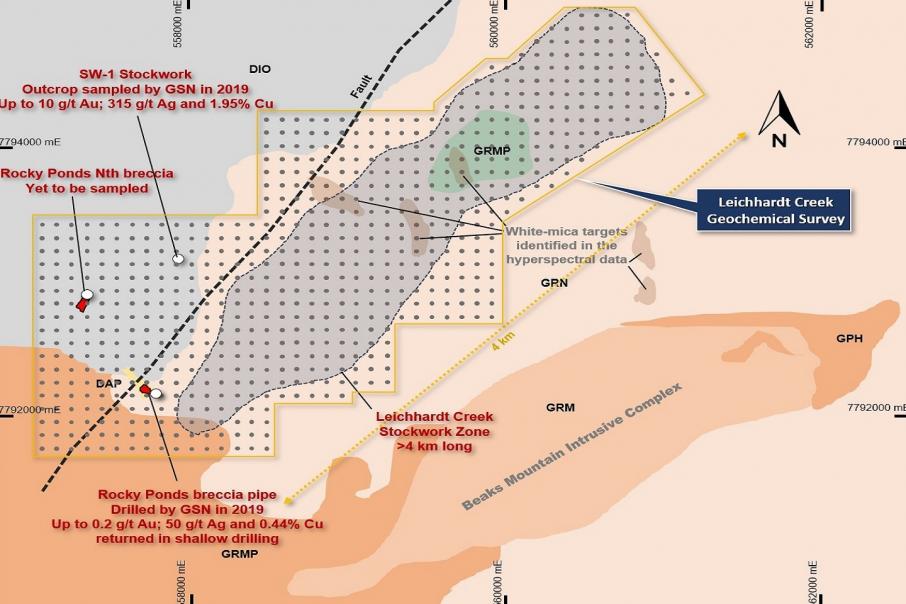 Great Southern Mining has racked up another successful exploration program at its Edinburgh Park Project in north Queensland, with a recently acquired hyperspectral dataset lighting up a litany interpreted geochemical footprints of mineralised porphyry, epithermal gold-silver and intrusive related, or “IRGS” copper-gold and multi-metals systems.

The Perth-based explorer said three targets really stood out in the remote airborne hyperspectral data, which is a type of exploration tool that detects minute amounts of radiation. These signals can be correlated to known elements or groups of alteration minerals along the electromagnetic spectrum.

The three new targets have up to a 2km “alteration zone”, which usually represents the influx of fluids sometime during the emplacement of hot rocks. These fluids can precipitate economic minerals if the prevailing chemistry is just right.

Another 11 targets have also been identified by Great Southern and are of a smaller scale than its top three, according to the company.

Meanwhile, some of the Great Southern team have been into the field surrounding the Leichhardt Creek area, located at the northern extent of the company’s tenure, collecting geochemical rock and soil samples from an area covering about ten kilometres square.

The company said the program at Leichhardt is the first systematic gold exploration the area has seen and it will consist of detailed geological mapping, selective rock chip sampling and around 700 individual soil samples.

In 2019, Great Southern ran a reconnaissance sampling and mapping program and collected some rock chips from the Leichhardt area. The assays came in at jaw dropping grades, with a peak assay at 10g/t gold, 315g/t silver and 1.95 per cent copper.

Following the geochemical sampling program at Leichhardt, Great Southern will turn its attention to the interesting looking targets further afield that were identified through a combination of the hyperspectral data and geophysics.

The phase two program is budgeted for 2,000 geochemical samples centred around the Edinburgh castle prospect over an area of about 75 kilometres square.

The company has also made a formal application for an exploration license covering an additional 229.4 square kilometres, bringing Great Southern’s landholdings at its Edinburgh project to greater than 1,200 kilometres square.

The new application, named the King Creek prospect, is located just to the east of Evolution Mining’s Mt Carlton gold project. The structure that looks to control the location of the Mt Carlton deposit extends onto Great Southern’s holdings according to the company.

The market seems to be endorsing Great Southern’s strategy of late too with the company’s stock jumping from 4c at the end of last month to an intraday high yesterday of 12c.