Great Southern Mining’s maiden drilling program at its Rocky Ponds breccia pipe discovery in northern Queensland has intersected strongly anomalous zones peaking at 0.2g/t gold, 49.7g/t silver, 0.44% copper and 0.58% zinc within sulphide-rich epithermal altered mineralisation. The deposit geology is similar to the Mount Carlton mine, 20km to the south, which hosts 1 million ounces of gold and 33 million ounces of silver. 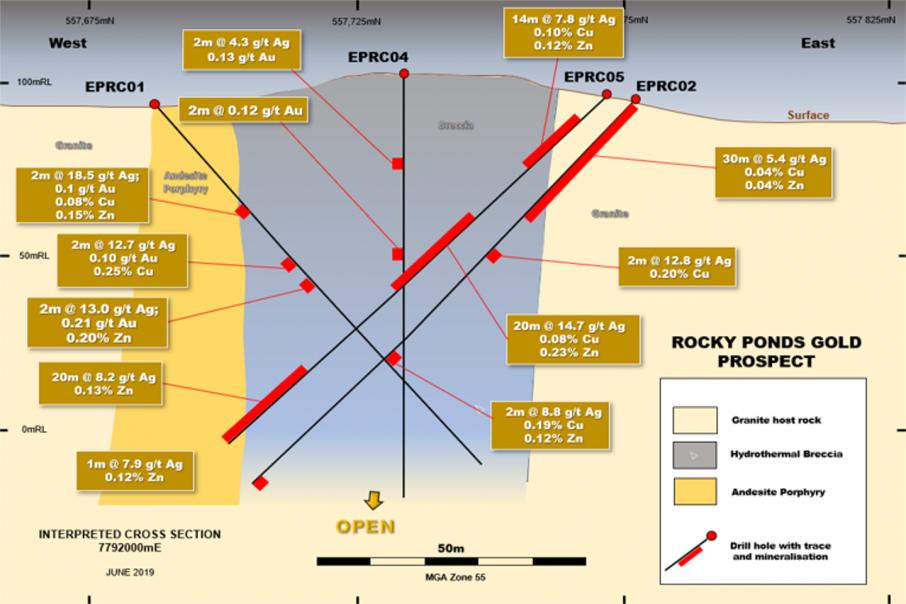 Multi-commodity explorer, Great Southern Mining, might just be onto something at its Rocky Ponds breccia discovery in north Queensland, with a maiden drilling program showing high-sulphidation epithermal alteration with semi-massive sulphide mineralisation present.

According to Great Southern, the mineralisation is dominated by the iron sulphide mineral pyrite, but also contains copper, zinc and lead sulphides, enhancing the overall prospectivity for a deep, zoned metallic ore system at Rocky Ponds.

The drilling was completed to determine the subsurface extent of an outcropping breccia located in February, that returned rock chip sample results up to 0.38g/t gold and 6.9g/t silver at the surface.

The prospective-looking felsic porphyry “pipe” is exposed over 100m long and 60m wide and while the surface grades looked modest, similar economic deposits can be leached of their metal content near the surface, with economic grades developing as “ore zones” deeper within the breccia pipe’s structure.

This week’s drill results from Rocky Ponds show that the company is on the money, with encouraging precious metal and base metal numbers turning up 60m below the natural surface within the breccia pipe feature.

Planning for a follow-up exploration drilling program at the prospect is underway.

Rocky Ponds forms part of the larger Edinburgh Park project located about 20km north of Evolution Mining’s Mount Carlton gold operations, which has a total endowment of 1 million ounces of gold and 33 million ounces of silver.

The Mount Carlton mine is one of the highest-grade open pit gold operations in the world and was forecast to produce up to 105,000 ounces during the 12 months to the 30th June 2019, at an all-in sustaining cost of production between AUD$670 and AUD$720 per ounce.

The dimensions of the Rocky Ponds pipe are similar to Resolute Mining’s Welcome breccia deposit located 40km to the west, which holds 208,000 ounces grading 3.2g/t gold.

These styles of intrusion-related gold systems in north Queensland tend to have significant vertical extents in the hundreds of metres and are often connected to large, feeder porphyries at depth.

The Welcome deposit is a typical example with higher-grade gold mineralisation located at between 300-500 metres below the surface and then continuing to at least 800m depth.

Similarly, the Mount Leyshon porphyry breccia deposit holds 3.8 million ounces at 1.44g/t gold and is most strongly mineralised from depths of 100m to 500m below the natural surface.

Hence, the anomalous assay results associated with sulphide-rich mineralisation at Rocky Ponds are intriguing and may just be the tip of the iceberg for Great Southern’s hunt for gold-copper porphyry orebodies in this underexplored region.

The analogues to the early drilling by Conquest Mining in the discovery of the Mount Carlton deposit nearby are not lost on Great Southern Executive Chairman John Terpu either, who was Conquest’s Managing Director at the time and intimately involved in that discovery and the later development of that deposit.

Regarding the initial Rocky Ponds drilling results, Mr Terpu said:“The Rocky Ponds breccia pipe has already yielded exciting results for GSN and while we continue to analyse the data, what is clear is that we have intersected a well-developed hydrothermal system that appears to manifest as a steeply inclined breccia pipe.”

“We have only just scratched the surface of this system when you consider the depths of gold mineralisation in other breccia systems such as Mt Wright and the Welcome breccia pipes.”

“The drilling has intersected the margins of a mineralised system that resembles the Mount Carlton system. The exploration results are highly encouraging for the potential existence of a well-developed high-sulphidation gold-silver-copper deposit.”

Rocky Ponds was discovered by reconnaissance geological mapping and sampling and came soon after the delineation of another large-scale porphyry system covering nearly 6 square kilometres at the Leichardt Creek prospect, a short distance to the northeast.

This region of northern Queensland is associated with extensive felsic volcanic activity and intrusions responsible for the formation of a cluster of tier-1 deposits, like Kidston, Mount Leyshon, Mt Wright, Ravenswood and Mount Carlton, with gold endowment clocking in at more than 13 million ounces of gold to date.

Understandably then, Great Southern is pretty stoked with its first real foray into the Edinburgh Park project region, given the plethora of major company-making gold and copper porphyry discoveries and abundance of sought-after breccia pipes uncovered in the district.

They say that where there’s smoke there is fire and the company will be hoping that its recent drilling at Rocky Ponds has just clipped the top of something much bigger at the prospect area.