Great Southern Mining has laid claim to the discovery of what could be a significant intrusion-related gold system containing polymetallic credits in its highly prospective Edinburgh Park project in North Queensland. In what is the first systematic gold exploration in the region, the company said its initial results produced all the hallmarks of a major mineralised system. 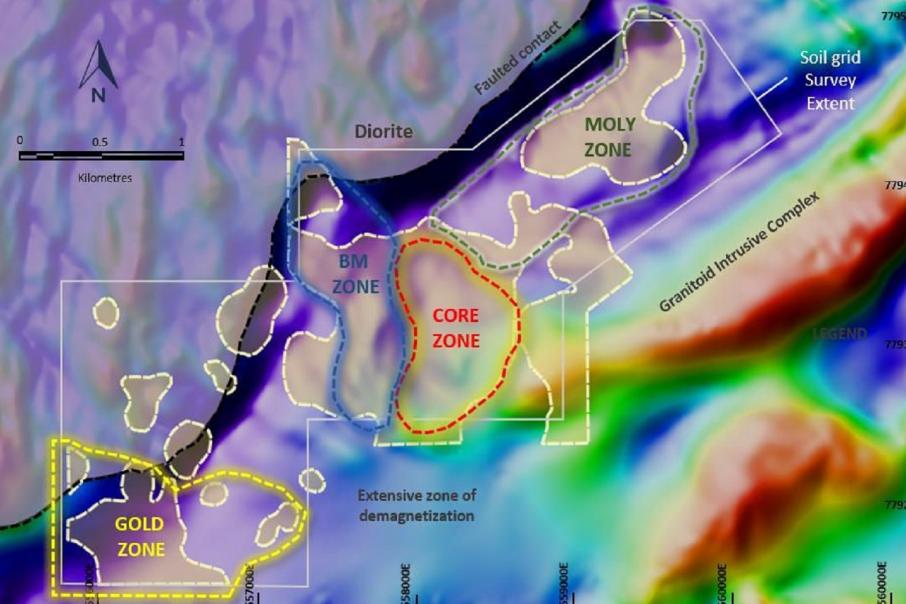 Great Southern Mining has laid claim to the discovery of what could be a significant intrusion-related gold system containing polymetallic credits in its highly prospective Edinburgh Park project in North Queensland. In what is the first systematic gold exploration in the region, the company said its initial results produced all the hallmarks of a major mineralised system.

The results of the company’s maiden geochemical mapping show a large hydrothermal system with the geochemical signature of an intrusion-related gold system, or “IRGS” at the Leichhardt Creek prospect.

Great Southern’s Chief Operating Officer, Mark Major said: …“The prospect has all the technical attributes of a major IRGS exhibiting strong metal content. This as a significant step toward potentially discovering that Tier-1 deposit.”

A hydrothermal system results from an influx of fluids during the emplacement of hot rocks, or “intrusives”. These fluids change the original chemistry of the surrounding rocks and precipitate new hydrothermal minerals and sometimes economic mineral deposits.

Metals, and groups of metals in IRGS systems, usually appear in predictable zones forming in various concentrations dependent on the surrounding temperatures.

The Mark Major-led Great Southern has adopted a recent trend in geological exploration targeting what are predicable chemical pathways to pinpoint mineral-rich deposits.

The company said the Moly Zone, which contains up to 49 parts per million molybdenum, transitions into a polymetallic halo containing molybdenum-tungsten-antimony-bismuth.

Great Southern said the Base Metal zone also forms a halo to the south-west of the Core Zone and comprises concentrations of zinc up to 786ppm, lead up to 247ppm and silver 2500ppb.

Another mineral-rich zone, the Gold Zone, lies at the south-west edge of the survey area showing a coherent gold anomaly up to 51ppb extending over an area of 750m by 600m. Great Southern said the Gold Zone is only partly defined and open to the southwest.

The company said the Leichhardt prospect shows similar geochemical affinities to other well-studied deposits in the region, including the Mt Wright and Kidston mines.

According to Great Southern, North Queensland is a hot spot for IRGS’s, within the Kennedy Igneous Province in North Queensland containing more than 100 known systems and 20 million-plus ounces of gold.

Genex Power, who are now producing hydroelectricity from the abandoned Kidston mine, said the first 12 months of mining operations churned out over 225,000 ounces of gold, making it the largest gold producer in Australia at the time.

The historical numbers produced in the region from IRGS deposits suggest huge upside potential for Great Southern, and the follow-up exploration will be watched with interest.

Mark Major said: …“Our focus here will now be on defining the full extent of this system through expanding the geochemical program and utilising geophysical methods to start defining this system in three dimensions; while we undertake more geochemical and mapping programs over other priority target areas within the extensive 1,062 km2 landholding.”