Grade is king for Delecta in Nevada cobalt play

Delecta Limited has purchased the high grade Highline cobalt-copper project from a private vendor in the emerging Goodsprings mining district, 50km southwest of Las Vegas in southern Nevada, USA. The historical mine produced cobalt up to an eye-watering 12.45% and an average copper grade of 35%. The claim area has been sitting idle for nearly a century and has seen pretty much no modern exploration. 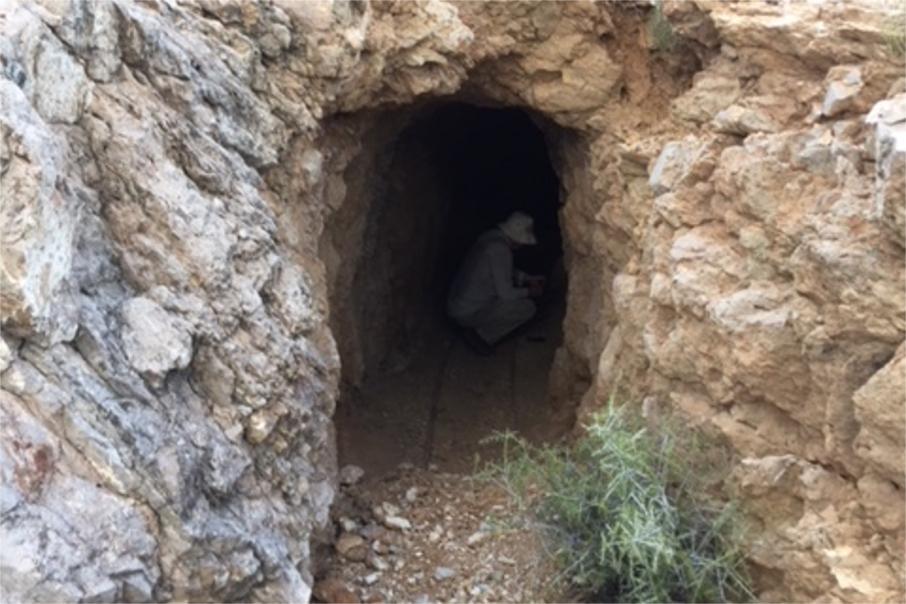 Entrance to the Highline cobalt-copper mine adit

ASX listed Delecta Limited has pounced on 5 patented mining claims in the highly prospective cobalt-copper mineralised Goodsprings district in the southern part of Nevada in the USA.

Delecta is one of a wave of ASX listed companies that are hoping to breathe new life into historic, super-high grade mining districts that were previously worked over on a small-scale by old timers, who did not have the luxury of modern exploration techniques.

The Perth based company has entered into a binding option agreement to fully acquire Silver Queen Mining Pty Ltd, who is the registered owner of the high-grade Highline cobalt-copper project in Nevada for a cash and scrip deal worth about $750,000.

The Highline project boasts an old mine adit that was dug into the side of a hill by prospect miners who simply chased any visible ore veins that they could see.

Exposures of outcropping cobalt oxide and the copper carbonate minerals malachite and azurite are plentiful around the old adit according to the company.

Records of historical mining at the Highline claim group between 1917 and 1921 show cobalt being produced at extraordinary grades of up to 12.45% whilst copper was being churned out at an average grade of 35%.

The project area has effectively sat idle for nearly a century now and it has had practically no modern exploration techniques applied to it.

The claims are adjacent to ASX listed New World Cobalt’s and Tyranna Resources’ land holdings at Goodsprings, both of whom are active in the region and have recently unearthed encouraging numbers on their own ground.

The district has a rich history, which saw 4 mines – including the Highline mine– producing high-grade cobalt ore as the primary source.

The company will complete a significant rock chip sampling program across its new land holdings as part of its 90-day option period and the assay results will no doubt be highly anticipated.

Delecta Managing Director Malcolm Day said: “Given the company’s success with its investment in European Lithium Ltd, the company has continued to seek and evaluate other investment opportunities in the battery minerals space.”

“The increased demand for battery minerals, like lithium and cobalt, is primarily due to the rapid advancement and demand for electric vehicles.”

“Given the Highline mine’s previous mining and exploration was circa 100 years ago, the company believes that the Highline cobalt-copper project represents a relatively low risk opportunity in an area of known mineralisation”.

Commenting on the agreement to acquire Highline, consultant geologist to the company, Greg Smith said: “This region has a history of high grade mineral production and I’m optimistic that modern exploration methods will unlock the potential of the area.”

With the current spot spice of cobalt hovering around USD$55,000 per tonne, the opportunity for Delecta looks real if it can discover wider scale cobalt mineralisation at the project by deploying modern techniques.

According to the company, production records from the multi-mineral Goodsprings district show the wider area has yielded substantial tonnages of zinc, lead, copper, gold, silver and cobalt ores in the past.

At Highline, the records show that 132 tons of copper were produced at the highest grade in the district from 477 tons of ore.

The mineralisation noted from Highline is considered separate to the surrounding zinc-lead ore bodies in the area and is predominantly copper ores with significant accessory cobalt credits.

The copper price is also looking pretty good right now too at around USD$6,275 per tonne.

Upon exercise of the option agreement, Delecta will contract a consultant geologist to engage with the vendor of the Highline project, for which he will be paid an agreed day rate and be entitled to up the 40 million Delecta options at a strike price of 1.5c, upon achievement of certain milestones.

Delecta’s Highline play is a classic one that is being replicated across a swathe of fast moving ASX listed juniors right now. It involves finding historic old small-scale mines that were known to produce super-high grades in their day but have seen a dearth of modern exploration techniques.

Many of these projects have mouth-watering mineral ore grades, the challenge now for companies like Delecta is to show they have real scale by applying some regional exploration smarts.

Finding old reports that show cobalt grades at 12.45% and copper at 35% is sure to quicken the heartbeat in any case.