Governments do their own ‘double dipping’

Duplication of services across all levels of government is costing the economy billions. 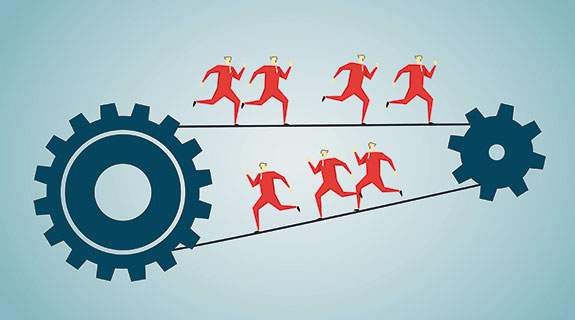 Duplication of services across all levels of government is costing the economy billions.

Political commentators nationwide have rightly concluded that the Abbott government’s 2015 vote-buying budget has kicked the reform can down the road.

For those unfamiliar with political jargon, that means Tony Abbott, Joe Hockey and Mathias Cormann were more focused on re-election than on implementing much-needed reforms.

To some extent that’s understandable, since politicians love being loved.

Protracted bad polls make political life so miserable that even the generous perks and big salaries politicians command fail to compensate. So a flamboyant-style budget like that handed down this month was a virtual certainty.

But that means other things went by the board, including, especially, trimming the size of the bloated Canberra bureaucracy and the national debt.

For the record, gross government debt now stands at $320 billion, up from $257 billion last year. And annual interest payments are running at $13.2 billion, or more than $1 billion a month.

When I see figures like that I resolve to tell my Liberal and Labor rank and file mates to move to oust the current crop of incompetent, wastrel senior politicians, and replace them with courageous people.

If it is, then surely the required reforms could at least be scaled or stratified, beginning with the extremely difficult changes down to those easily implemented.

Since at least February 1988, I’ve believed that a major cost saving in the easy-to-implement category would be elimination of the abundant duplication that’s been built up since 1901.

During his first round of press interviews as premier, I recall, he told reporters that an area of concern was the costly duplication in administration by Canberra and Australia’s state and territory governments.

I still regard this to have been one of the most farsighted observations of any post-war WA premier.

I realise this figure not only refers to the doubling-up of administration by Canberra’s and state bureaucracies, but also includes local government.

Even so, the greater portion of that $21 billion, in 2003-04 dollars terms, could be attributed to wasteful overlapping by Canberra of the state and territory bureaucracies, where one agency or department within each jurisdiction could quite adequately administer matters in designated areas.

Put bluntly, Canberra is overloaded with unnecessary bureaucrats whose duties can and should be undertaken by state-based public servants already carrying out identical or similar tasks.

Although Canberra’s responsibilities are itemised in Section 51 of the Australian Constitution, its tentacles have spread far and wide beyond those limits.

Instead of kicking the can down the road, both major parties should instead set about jointly and co-operatively rolling back this costly bureaucratic over-reach.

Such a process could be undertaken over a number of budgets, perhaps as many as 10, with the saving either handed back to taxpayers as tax cuts or used to reduce the present $320 billion national debt.

Peter Dowding was right on the money 27 years ago.

And while Labor leader Bill Shorten’s budget reply speech wasn’t well received by commentators, he included the following: “There are measures in this budget Labor will support, in the national interest.

“We will cooperate on national security, on overdue drought relief for our farmers, and on small business.”

All are welcomed commitments.

But why didn’t Mr Shorten challenge the government to come to the table and offer bipartisan support to eliminate duplication?

The commitment to such a relatively easy goal would, among other things, inculcate into government and opposition MPs the spirit of cooperative governance, something sadly lacking in contemporary Australia.

The fact that a former Labor premier pioneered the condemnation of this costly burden so long ago only makes Mr Shorten’s omission from his national interest list that much more regrettable.

How to reverse this?

The only advice I can offer is that the WA Labor Party delegation should propose a motion named the Peter Dowding Clause, calling for the ridding of all duplication by, say, 2025, at the next National Labor Conference