‘Fat cat’ wage hikes expose a lack of accountability and political will. 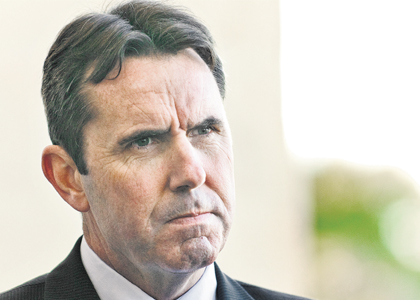 CHANGE: The reform of Western Power will be a huge challenge for all those involved, including Energy Minister Peter Collier. Photo: Grant Currall

‘Fat cat’ wage hikes expose a lack of accountability and political will.

DEALING with the state government on a regular basis can be an excruciating experience for many in business.

This affliction is a frequent occurrence for the big players but really hits the medium to smaller enterprises and organisations, which don’t deal with government on a daily basis.

Business people, especially those at public-listed companies, must read about the generous pay packets of some of our senior bureaucrats with incredulity.

Public service pay has always been an issue. It’s either been too low to attract and retain high-quality staff or it’s too high for the responsibilities that these public servants are asked to perform, especially in the commercial sphere.

What has been of interest in the latest round of community and media reaction to the high wages has been the organisations involved and the general lack of accountability and transparency.

The main target for community, media and political disbelief, has and continues to be Western Power. Another to crack a mention is LandCorp, the state government land developer.

Both are government trading authorities that are overseen by government-appointed boards and at arm’s length from direct ministerial control.

These arrangements are largely to ensure that the organisations behave in a commercially and corporately independent manner, with ministers as shareholder representatives on behalf of taxpayers.

To manage the propriety and politics of remuneration, this task is left up to the Salaries and Allowances Tribunal, particularly in overseeing executive salaries.

But the senior executives at these organisations negotiate their contracts and bonuses directly with their boards, again at arm’s length from perceived government intervention.

One of the chief concerns about the pay scales for senior executives at organisations such as LandCorp and, in particular, Western Power, is the dominant market position they enjoy.

There has long been disquiet among private land developers about the role of LandCorp in the market and the seemingly easy way in which it uses its position within government to achieve its commercial outcomes.

Most developers believe that LandCorp gets a significant commercial advantage through its position within government, but are now mostly resigned to partnering LandCorp rather than fighting its existence.

In the case of Western Power, it has been an ongoing sore point with the government and the community, given its weak management in maintaining the network, especially in light of its culpability in starting bushfires.

The people of Toodyay are still wrestling with Western Power over a fallen pole fire nearly three years ago that destroyed homes, property and livestock.

The pay increases are also harder to swallow when power prices have gone up 60 per cent during the past four years.

Max Trenorden’s upper house standing committee was scathing about the management and the culture of Western Power; a view shared by Premier Colin Barnett and Energy Mnister Peter Collier.

Opposition leader Mark McGowan has responded to the public and media reaction to the pay increases by announcing that, if he wins the next election, he will cap executive salaries and bring them more into line with other public service executive salaries.

The premier has responded by saying the government is working on stripping boards of the ability to set wages and conditions and hand that responsibility to the SAT, which already sets the broad bands of senior public sector wages.

Mr Barnett went further and partially defended the high salaries, saying that if these individuals were working in similar sized private sector businesses they would be earning a similar salary.

He may have felt compelled to do this, however, given the fact he agreed to pay his current chief of staff nearly double what his predecessor enjoyed.

For those in the private sector this is difficult to resolve, given the protected environment these businesses enjoy as government agencies that don’t truly have to compete for their survival.

The government’s plan for stripping boards of the responsibility for wage and salary negotiations sets a poor precedent because it is fundamental to good corporate and board governance.

At the heart of it, the government is signalling that it doesn’t believe in the competence and judgment of its appointees to carry out the function and properly hold the management accountable.

Last week, mining magnate Gina Rinehart showed everyone how its done when she used her position as the biggest shareholder in Fairfax to block moves to change the chairman’s remuneration.

Under the mildly democratic conventions of shareholder meetings, Mrs Rinehart was able to exercise her right to have the final say in supporting or otherwise the proposed remuneration package.

Having lost half the value of the stock she bought in less than a year,

she wasn’t in the mood to reward those entrusted to look after her investment.

The current model allows senior executives to negotiate contracts and bonuses behind closed doors, and the size or otherwise of the packages is only revealed to the public when the agency drops its annual report in parliament.

Western Power, LandCorp and similar utilities are not required to act like public-listed companies and call EGMs, AGMs, undertake quarterly financial statement to the ASX, and hold road show presentations for investors.

The ability of taxpayers as shareholders to demand a similar amount of accountability and transparency is extremely limited; we leave that up to the responsible minister and the parliament.

It’s often at this point where things become problematic for all concerned. Western Power has had a long history of believing that, because it was corporatised all those years ago, it is a law unto itself.

It had a culture where its senior executives didn’t believe that state governments or even the parliament had much of a role or right in setting directions for the utility.

Its culture was as such that its senior executives were comfortable in waging an open and hostile lobbying campaign against the Gallop government’s plans to split up the utility.

It would seem that up until recently nothing much had changed at Western Power, until the appointment of new CEO Paul Italiano, who has been given the support of the government to reform the utility.

This is probably one of the toughest change-management gigs going at present and is a huge challenge for both Mr Italiano and the government, especially the energy minister.

One thing the government could do to support change is to properly act as the shareholders’ (taxpayers’) proxy and hold the management of these utilities to account; if need be voting down their salary proposals and not hiving that off to another faceless government agency.

• Paul Plowman is a former head of the state government's media office and is currently MD at Plowman & Co, which specialises in business-to-government relations