The decline in the number of exhibitors taking part in the third annual Good Food & Wine Show at the Perth Convention and Exhibition Centre has done nothing to dampen the enthusiasm being shown by local foodies in attendance on the event's first day. 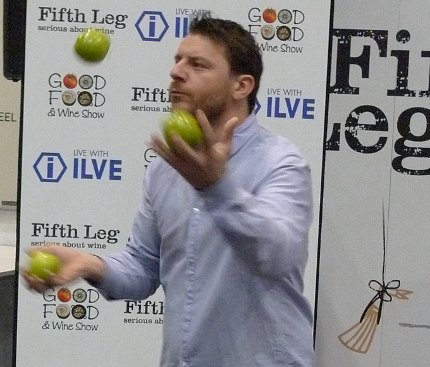 Celebrity chef Manu Feildel does some juggling at the launch of the Good Food & Wine Show in Perth.

The decline in the number of exhibitors taking part in the third annual Good Food & Wine Show at the Perth Convention and Exhibition Centre has done nothing to dampen the enthusiasm being shown by local foodies in attendance on the event's first day.

GFWS exhibition director James Lang, who officially opened proceedings this morning alongside some of the nation's most revered and heavily publicised celebrity chefs, said there were 197 stall holders at this year's event, down from 212 last year, following a backlash from local wine producers after wine makers from the eastern states were allowed to participate in the event.

"We've found that some of the WA wineries have pulled out of the show," Mr Lang said.

"Some people thought it should remain exclusively Western Australian.

"So some of the wine area has dropped off."

CMS Events director, Richard Campbell developed the WA Wine and Food Show into one of the state's premier culinary events before selling it to the eastern states-based Diversified Exhibitions Australia, which rebranded the event in 2008.

Diversified Exhibitions Australia, which now runs the GFWS, opened the event up to operators from the eastern states to enhance the national offerings on show.

Despite the backlash Mr Lang said he was confident those local operators that didn't participate this time round will be back next year.

"I suspect what will happen is they'll come in and have a look at this year's show and be back again next time," he said.

Alongside Mr Lang this morning were popular chefs including Gary Mehigan and George Calombaris from Network Ten's MasterChef as well as Manu Feildel, Matt Moran and Tobie Puttock.

Mr Feidel, a third generation chef, entertained onlookers this morning with an impromtu circus act: juggling (and eating) apples before giving a plate a spin atop a short pole.

Not bad for a classically trained chef who said he enjoyed a spot of salsa dancing in Perth last night.

Although Mr Lang suggested he had previous experience in a circus.

Hundereds of people queueing to enter before 10am on a Friday morning indicated to Mr Lang that this year's GFWS may eclipse previous attendance records.

"Melbourne's show was up a little on last year," Mr Lang said.

"And I'm confident of reaching that this year over the three days."

All the chefs will be selling their best wares at the Fifth Leg Restaurant on site and only on Friday night will people at the event be able to participate in the GFWS's After Dark session from 6pm - 9.30pm.

This year also sees the addition of the Gourmet Garden Cooking School where celebrity chef Dominique Rizzo will whip up meals using Gourmet Garden herbs and spices for Perth's food and wine lovers.