Wiluna Mining continues to tick boxes as it hurtles towards implementing its much-heralded production expansion plan at its Wiluna gold mining project that will see existing gold production double and then double again. Construction of a 750,000 tonne-per-annum flotation plant has now commenced as the company looks to grow gold production to 250,000 ounces annually. 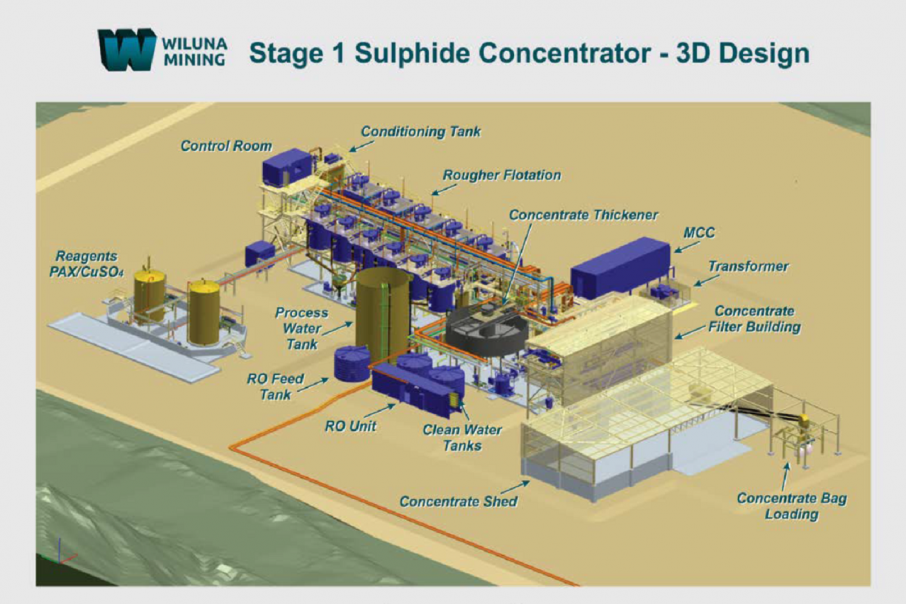 Wiluna Mining Corporation continues to tick boxes as it hurtles towards implementing its much-heralded production expansion plan at the Wiluna gold mining project that will see existing gold production double and then double again.

Current mining operations produce around 60,000 ounces of gold annually and the company is now frantically ticking boxes as the countdown to the implementation of stage one of its expansion plan begins.

Wiluna has now committed to a five-point mine development plan for the next 24 months which will see the company strengthen its balance sheet, increase operational cash flows, transition to the production and sale of gold concentrate, expand overall gold production and pursue more exploration and feasibility studies to ultimately reach the 250,000 ounce-per-annum milestone.

According to management, the key to extracting full value from the Wiluna mining operation is the substantial transition to underground mining and the processing of sulphide ore.

Under Stage 1 of the development plan, Wiluna aspires to increase gold production to 120,000 ounces-per-annum from the existing 60,000 ounces a year. As part of Stage 1, the construction of a 750,000 tonne per annum flotation plant has commenced and it is expected to be completed and commissioned in October 2021. Rehabilitation of underground declines for the mining of sulphide ore has also begun whilst repairs and upgrades of ventilation and dewatering networks are on schedule ahead of gold production from the plant anticipated for the third quarter 2021.

Gold reserve growth is also a key to Wiluna’s strategy and the company currently has seven drill rigs in full swing to further infill and extend the existing gold mineralisation. Updated mineral resource and ore reserve estimates are anticipated for the final quarter this year.

Wiluna has recently grown its underground ore reserves by 142 per cent from 273,000 ounces of gold to 661,000 ounces as it aims for a minimum initial five-year mining operation at the Stage 1 processing rates. The company’s goal is to add over 500,000 ounces of high-grade shallow ore reserves through further infill and exploration drilling.

It is also looking to drill-out shallow mineralised zones to 600 metres depth as it aims to build a 2.5-million-ounce resource base in the indicated and measured categories to aid in mine planning.

Once the Stage 1 flotation plant is commissioned later in the year, the company will also be able to process historical tailings inventories totalling some 579,000 ounces of gold for a potential 15-year production. Subject to approvals, that project is anticipated for completion in the first quarter next year.

In Stage 2 of the expansion plan, Wiluna is targeting 1.5 million tonnes-per-annum production for 250,000 ounces of annual gold output. The ongoing resource and development program to grow the reserves and resources will play a key part in these endeavours and a feasibility study will be completed by the end of 2021.

The company also sees other opportunities for future improvements in terms of performance and cost. The current mine and processing plans along with ore reserve and production targets are a base case and have not yet been optimised to maximise cash flow, according to management.

Wiluna aims to assess more optimal solutions in areas such as renewable power generation, long-term water supply, efficiency of ore treatment, along with mining of remnant mineralisation in stope pillars and footwall and hanging wall skins. Intriguingly, management reports that some 3.3 million tonnes of such mineralisation grading 4.5 grams per tonne gold for 469,000 ounces were not considered for the previous ore reserve update.

Wiluna’s staged expansion plans have shifted into high gear now and as the rods continue to turn punters will be keeping a close eye on developments at Wiluna in what may turn out to be a watershed year for Perth-based gold miner.