Gillard going for a record five in five

The prime minister is in a class of her own for several reasons ... not many of them positive. 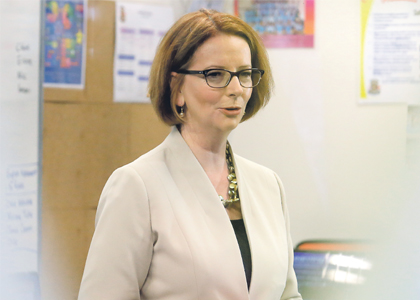 The prime minister is in a class of her own for several reasons ... not many of them positive.

This was evident from the very beginning of her 30-year-long political career, the inspiration for which was her leftist hero, Welsh Labour politician Aneurin Bevan (18971960).

In 1982, Ms Gillard discontinued her studies at Adelaide University to become full-time president of the Melbourne-based, leftist-oriented Australian Union of Students.

Soon after reaching Melbourne she offered the following self-assessment to a local reporter (The Age,

“Money and prestige don’t interest me, but whatever involves me, I seem to have the motivation to get to the top.”

But AUS imploded in 1984, and it took three years before a similar inter-campus body, the National Union of Students, emerged to ostensibly represent tertiary student interests.

In that year Ms Gillard also became convenor of the Socialist Forum, which included among its members 45 ex-communists and 80 Labor Party leftists.

Also in 1984 she enrolled at Melbourne University, from where she graduated in arts and law in 1986, and went on to join union-oriented Melbourne law firm, Slater & Gordon.

The Socialist Forum’s members would spend the remainder of the 1980s mapping out leftist pathways for Australia’s economy.

As things transpired these would be remarkably similar to what she, as deputy prime minister, and the three other members of the so-called ‘gang of four’ - prime minister Kevin Rudd, Treasurer Wayne Swan, and finance minister Lindsay Tanner -regularly put before Labor’s caucus during 2008 to mid-2010 for adoption as government policy.

It helps to note that 1983 was also the year former ACTU president Bob Hawke became prime minister, a position he’d hold until 1991.

He, along with the dominant faction making up New South Wales’

This rarely noted difference between her and the social democratic Hawke-Keating pathways would again be highlighted by the fact that former Gillard ministers,

It’s also helpful to recall that Bevan, in the early 1950s, sparked a major ideological fight within his party that divided it leftwards and rightwards, with him leading the leftists, thereafter known as Bevanites.

Thankfully for Britain and British Labour, a man in the vein of Messrs Hawke, Crean, Ferguson and Bowen, emerged to combat ‘Bevanism’.

But Mr Gaitskell died suddenly on the eve of an intended visit to Moscow, sparking suspicion within MI5 and Labour’s ranks. (See pages 362-363 of Peter Wright’s bestseller, Spy catcher).

Although the specific issues of 1950s Britain differ from those of today’s Australia, the ideological ghosts of the former can be seen in the various chimeras hovering over Gillard-led Labor.

Evident also is undoubted yearning for newfangled and ever higher taxes, and ever bigger costly bureaucratic empires.

There’s the desire to control Australia’s free press, something leftists invariably hark back to.

Also not to be forgotten is the boosting of power of union leaders and the downgrading of defence.

It’s as if Aneurin Bevan has been haunting today’s Canberra.

But back to Ms Gillard.

While at Slater & Gordon she met then Australian Workers Union’s rising star, union leader Bruce Wilson, with whom she became romantically as well as professionally and ideologically involved. She would create and register for him an entity called The AWU Workplace Reform Association Inc, through which he reaped hundreds of thousands of dollars from big construction companies.

But the Wilson association imploded in 1996, following a flurry of hectic moves across senior AWU ranks that included: threats to call a Royal Commission; Wilson’s removal from the union’s upper echelons; Ms Gillard’s resignation from Slater & Gordon; and her permanent discontinuance of her nearly decade-long legal career.

Two years later she was Canberra-bound, as member for the safe Labor seat of Lai or, replacing onetime television quizmaster, Barry Jones.

A further decade later and she had teamed up with the dysfunctional Mr Rudd to lead Labor into power at the December 2007 election.

However, like AUS and the AWU association she’d created, the gang of four also imploded - a hat trick of failures.

The last of these occurred around midnight of June 23-24 2010; and again, the self-confessed ambitious Ms Gillard made it to the top, this time to become Australia’s prime minister.

But what if there’s another implosion this coming election day? What do we call that?

I contacted several of my knowledgeable cricketing pals to ask how such a rarity in that game is described. None knew.

Look up Wikipedia, one said, which I promptly did.

“Four wickets in four balls is referred to in cricket literature and record books as four-in-four but the term double hat-trick has also been used in the media, as it will contain two different, overlapping sets of three consecutively dismissed batsmen,” Wikipedia says.

“It has occurred only once in international one-day cricket, in the 2007 World Cup, when Sri Lanka’s Lasith Malinga managed the feat against South Africa by dismissing Shaun Pollock, Andrew Hall, Jacques Kallis and Makhaya Ntini.”

But it’s not being fanciful to argue that Ms Gillard has already scored a four-in-four or double hat trick.

And it happened straight after Mr Rudd’s failure to proceed with what one-time Labor leader, Simon Crean, so kindly set up for him - a leadership challenge.

When Mr Rudd pulled back, fearing he’d be giving Ms Gillard a third triumph over him ... her cabinet had effectively imploded.

And if the minority Gillard-Swan government is ousted on the scale polls have been indicating for two odd years, that’s another implosion for Ms Gillard’s tumultuous career.

But with a leftist career boasting five implosions Ms Gillard would have indisputably risen to a class of her own.