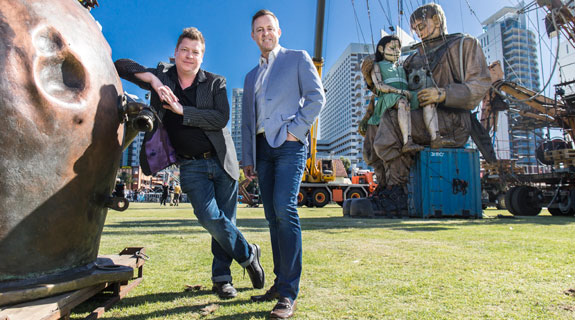 Retailers and hospitality operators in the city have cashed in on the tour of The Giants, with 1.4 million people filling City of Perth streets for three days for the opening show of the Perth International Arts Festival.

The Incredible and Phenomenal Journey of the Giants, by France’s Royal de Luxe, was made possible by a combination of state government and private sector support, with shopping centre developer Hawaiian contributing a six figure sum to the $5 million cost of the show.

The attendance showed there was no doubt that The Giants captivated the city, funnelling people into shops, bars and food outlets, but Hawaiian chief executive Russell Gibbs said the company’s motivations for sponsoring the parade were more altruistic.

“We do a lot for the community, often for those that are disadvantaged, but this was a chance to do something for all of Perth,” Mr Gibbs told Business News.

“It was a seminal event and will hopefully serve to inspire people as well.

“It also gave people the opportunity to get more in touch with the arts, and it’s a great experience in that regard.

“The impact has been above and beyond ‘wow, it’s a good spectacle’.”

Mr Gibbs said he was yet to see the exact turnover numbers from Hawaiian’s CBD arcade, Carillon City, but anecdotal evidence would suggest a bumper weekend for stores, food outlets and hospitality venues alike.

“Certainly the initial feedback was that traffic through Carillon City was up dramatically, so it had a big flow-through effect in terms of foot traffic, and I would suggest that would have flowed through to turnover as well,” Mr Gibbs said.

“I went through the Carillon food court and there was just queues and queues … it just appeared to me that people saw an opportunity after being in the sun to get into the shops, have something to eat, to cool down in the air conditioning, so I would say it’s had a big impact on retail.”

One retailer quizzed by Business News during the event on Saturday said the store was so busy it was “like another Christmas”.

Premier Colin Barnett shared Mr Gibbs’ view that the tour of the giants through the city streets was not done purely for the economic benefits it would provide.

“The state government and corporate sponsors did it to provide a great free event for the people of Western Australia, particularly young families,” Mr Barnett told reporters today.

“Yet there is an economic benefit; it’s great publicity for Western Australia, those images would have gone all around the world.”

Mr Barnett said the tour of The Giants was yet another example in Perth’s burgeoning arts and events scene.

“Perth has a very vibrant arts, sporting and events calendar and that is an absolute transformation.

“Add to that, Elizabeth Quay will be completed later this year, the new stadium under construction, the cultural precinct nearby in Northbridge; it’s just a fantastic transformation and it’s happened quickly and Perth audiences are supporting these events in their tens of thousands and I thank them for that.”

Mr Gibbs said he was not sure if the tour of The Giants could be replicated in Perth, but the event showed the capacity of the city to hold international-scale performances.

“As great a spectacle as it was, I would love to see us explore something else in the field for the foreseeable future,” he said.

“Certainly for the next generation coming through it would be wonderful to do again, but for the foreseeable future there should be other things that we can explore and Perth should be comfortable taking on this size event.

“I think the city has responded extremely well.”

“This is one of the largest examples of the extraordinarily transformational qualities of art,” Mr Holloway said.

“It has been widely accepted that Perth will never forget the weekend that it walked with Giants.”

Other corporate sponsors of the event included Crown Perth, Chevron, the City of Perth, Rio Tinto, Wesfarmers and Woodside Petroleum.