Getting more from the daily grind

From pods to beans, the founders of social enterprise Community Pod have extended their business model. 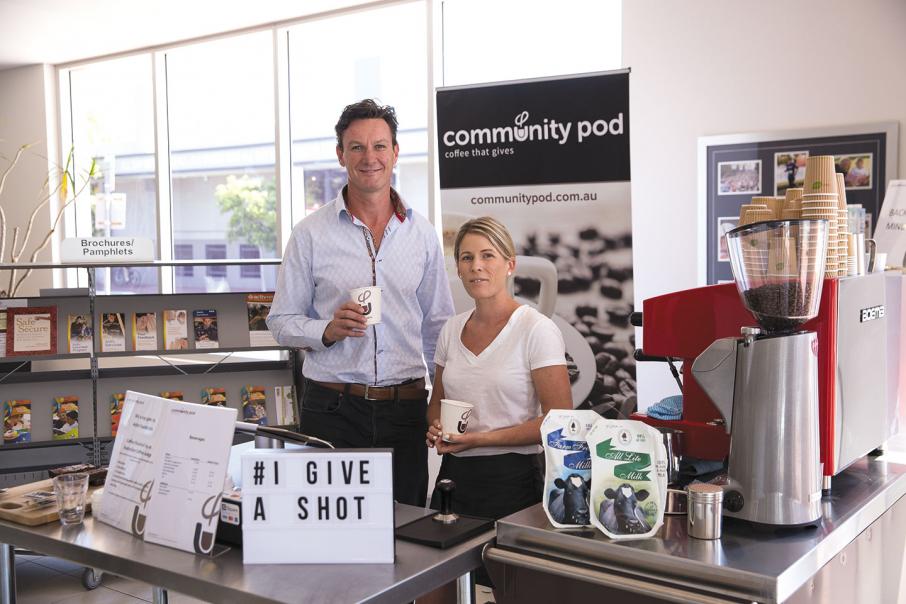 Mark and Megan Grogan have expanded their social enterprise into the coffee cart market off the back of a successful year in the coffee pod space. Photos: Attila Csaszar

From pods to beans, the founders of social enterprise Community Pod have extended their business model.

Nine months after they launched their Community Pod business, Mark and Megan Grogan are looking to add a new, complementary offering to their online service.

The Grogans say they have sold about 100,000 of their coffee pods so far, with $10,000 from the proceeds donated to charity.

Via its online platform, Community Pod allocates 10 per cent of each transaction to a charity from a selection of more than 60 nominated organisations, including Lifeline WA, Anglicare WA and RSPCA WA.

Each pod is biodegradable and the waste coffee grounds are collected and used by local initiative Life Cykel to grow oyster mushrooms.

With their latest initiative, Mr and Mrs Grogan plan to replicate the charitable and environmentally friendly model in the coffee cart market.

The Community Pod carts include a barista, who uses freshly ground beans rather than pods.

“We want to make a difference with coffee,” Mr Grogan told Business News.

“It is the second biggest commodity in the world after oil and it’s currently growing in the premium sector.

“The coffee carts are a natural progression from pods and we want to get at least 20 of these carts out there.

“The amount of funding may have dropped off because the economy has slowed down, and this enables supporters to kick it back up by simply installing a coffee cart.”

Community Pod installed its first coffee cart on the ground floor of Activ Foundation’s Wembley base last month, with 50 cents per cup donated to the organisation.

Mr Grogan said Community Pod covered the wages of a dedicated barista but did not pay rent to the building or office, which allowed 50 cents a coffee to be given to a chosen charity.

He said he was currently targeting corporates, but had also been in conversations with companies holding major events.

“We’re chasing places that have over 200 people,” Mr Grogan said.

“And if that’s a five-days-a-week business, we’re talking $25,000 plus per year for the charity, which is a lot of money just from drinking coffee.”

The cart at Activ has not only been popular with the foundation’s employees, other businesses residing in the building have also become regular clientele.

“The coffee obviously has to be good,” Mr Grogan said.

“We get it roasted by an Australian coffee judge, it’s fair trade and organic as well.

“People are encouraged to use their own mug in this environment; they receive a discount.”

In another plus for the environment, Bannister Downs Dairy collects the coffee grind waste when dropping off milk orders and then uses it for compost on its dairy farm.

“Their cows then eat that grass … so we’re basically turning coffee into milk,” Mr Grogan said.

“A 24-hour call centre said they were using 750 kilograms of coffee a year, with waste going straight into landfill.

“That’s just one business; imagine what the CBD is going through.”

Mr Grogan said Community Pod was in a capital-raising phase to buy its own coffee roaster and was in negotiations with Activ Foundation to run it at the Bentley site.

“Our goal for the business is to donate a collective $1 million a year,” he said.

“As we grow and establish our roasting plant we’ll also move into the cafe market, where we’ll continue to work with Life Cykel.

“We’ve had interest from overseas for distribution rights but we had to get it right in our town first, so our next port of call is the roasting side of it and then we can export it.”

Community Pod has an international trademark pending and Mrs Grogan said the business was also developing its ordering system to tap into high-traffic areas so customers could order ahead or employees could order from their desk and have it delivered to them.

“Sometimes we can get caught up in the daily grind of it all but when we see what the charities have done, that keeps us going,” she said.

“It might only be a couple of hundred dollars but that can go a long way.”