Geophysical surveys check out for St George in WA

St George Mining has delineated five new, high priority exploratory drilling targets for base metal mineralisation along the Cathedrals Belt at its Mt Alexander project located near Leonora in the Goldfields region of WA. The new targets include three virtually unexplored regions at the West End and Bullets prospects and two strong responses located down-dip and along strike of the existing Investigators mineralisation. 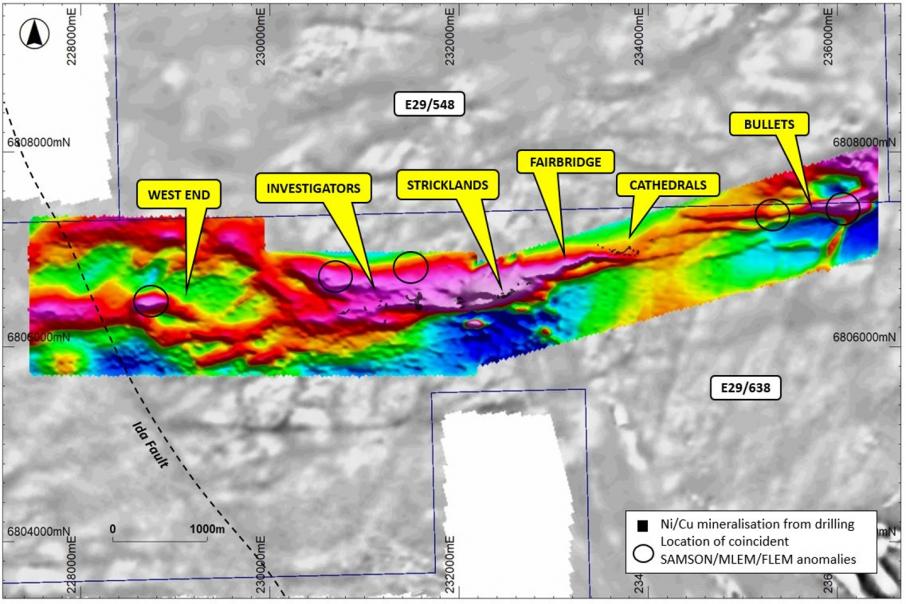 The strongest conductive response located at the West End prospect is 300 metres wide and just a stone’s throw from the regionally significant Ida Fault, which St George strongly suspects is the source of the nickel-copper-cobalt-PGM mineralisation it has located in spades at Mt Alexander.

There are also two very strong responses in the northern section of the Investigators prospect, which are located favourably down-dip and along strike just west and east of that defined base metal ore system.

Importantly, the newly defined targets are well-supported and corroborated by three separate geophysical surveys at Mt Alexander, along with the company’s own extensive drilling data sets throughout the region.

According to management, an extensive drilling programme will commence on the exploratory targets, once all approvals are in place.

“The new conductive target adjacent to the Ida Fault is particularly exciting. This area has never been drilled and we look forward to drilling this large target soon.”

“We are also very enthusiastic about the new conductive anomalies to the north of Investigators as our geological model for the Cathedrals Belt supports the scope for continuity of high-grade mineralisation either at depth in the northerly down-dip direction or through the repetition of the mineralised ultramafic in the north.”

“These are compelling targets for the potential discovery of further nickel-copper sulphides which could significantly expand the footprint of high-grade mineralisation at Mt Alexander.”

To date, the company has defined narrow, high-grade massive and disseminated nickel and copper sulphide mineralisation across 4.5km of strike at Mt Alexander, with the Investigators, Stricklands and Cathedrals prospects all showing tantalising assays very close to the surface.

The new targets at the West End and Bullets prospects are intriguing and if proven up, would extend the mineralised footprint to 8km of prospective strike.

Based on the success of the current ground-based geophysical program in identifying new drill positions, the sub-audio magnetic surveys will now be extended a further 6km to the east towards the Fish Hook prospect, to seek out additional conductive anomalies.

Drilling of the new exploratory targets represents a major step-out from the existing drill programs over the last two years or so for St George, which have largely concentrated on proving up the strike and down-dip extensions of the delineated mineralisation.

The campaign will be keenly watched once it gets underway later this month.