Geopacific is toasting the gift that keeps on giving at its Woodlark gold project in Papua New Guinea, which has delivered more high-grade intercepts in assay results from a 22-hole drilling campaign at the Boscalo area. The Perth company is on track to develop a world-class gold mining operation at Woodlark as it targets a revised ore reserve estimate of one million ounces plus by next month. 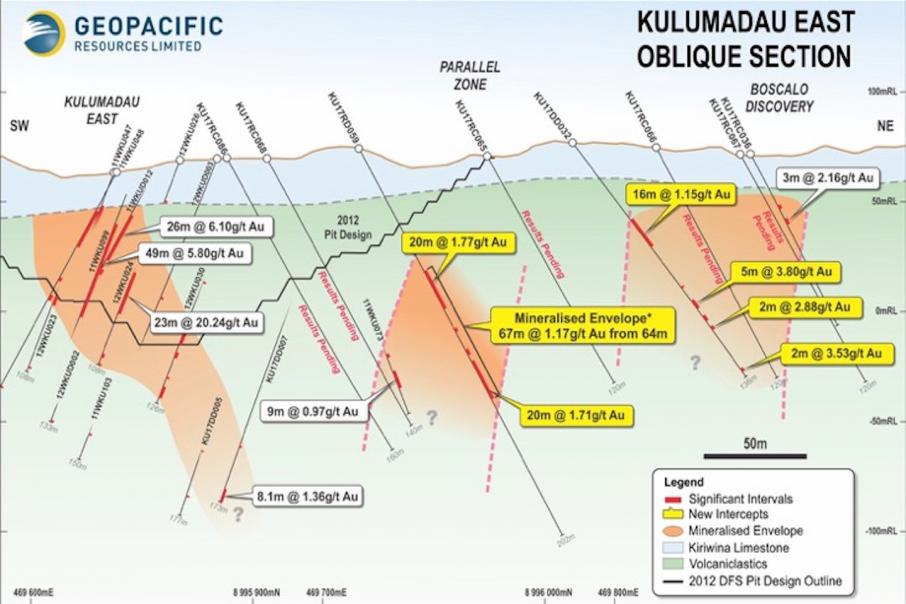 In a market update this week aspiring gold producer Geopacific said the assay results from a 22-hole RC drill campaign at the Boscalo area of its PNG Woodlark Island Project were headlined by an exciting 11m intersection grading 6.75g/t gold from 69m down-hole and 3m at 11.99g/t from the 57m mark.

The majority of holes at Boscalo have been drilled to a shallow depth of 120metres with some holes reaching 140metres.

Only two months ago Geopacific announced that Boscalo was a new gold discovery, situated beneath shallow cover and adjacent to the Kulumadau East deposit at Woodlark Island in the Milne Bay Province. Boscalo was first identified with several broad and high-grade intercepts in June last year with the headline number at that time an 18m intercept grading 8.99 g/t gold.

The company picked up around 86% of the Woodlark Island project for a bargain at around $10million in cash and shares last year after a previous operator spent $150m on it and ploughed 290,000m of drilling into it.

Geopacific has subsequently drilled an additional 30,000 metres with infill and extensional drilling targeting an updated mineral reserve of 1 million plus ounces, enough to support an initial 10 year mine life.

Geopacific has already initiated a countdown to its planned production schedule at Woodlark and is targeting a Definitive Feasibility Study during the third quarter of 2018.

The latest drilling results continue to build confidence in the project with mineralisation still open at depth and along strike.

In addition to the main zone, Geopacific said a parallel zone of mineralisation between Boscalo and Kulumadau East has also been identified, further confirming the significant potential for additional gold discoveries in the area.

Geopacific Managing Director Ron Heeks said, “The Boscalo discovery is an indicator of gold mineralisation that lies beneath the shallow limestone veneer. Woodlark’s existing deposits only scratch the surface of the regional potential and our work to identify attractive exploration targets is progressing well. We are excited by the apparent discovery potential across 60km² mining lease and 580km² of exploration licences.”

The company also confirmed this week it had achieved its spent and drilling milestones to increase its ultimate stake in the project from 86% to 91% via direct ownership of the project and its controlling shareholding in former project owner Kula Gold.

Geopacific’s agreement with Kula also provides a kicker that will see the ASX-listed explorer jump to 93% if it can define a mineral reserve of 1.2m ounces or more.

With solid drill numbers seemingly rolling off the drill bit every time it goes down, that doesn’t appear to be out of the question.