Geopacific has initiated a major exploration program at its Woodlark gold project in PNG. The company recently raised $10m and will channel the funds towards increasing its mineral resource inventory with a view to extending the proposed mine life beyond 10 years. Drilling will focus on under-explored, high grade structural corridors and historical targets between and adjacent to the large Kulumadau and Busai gold deposits. 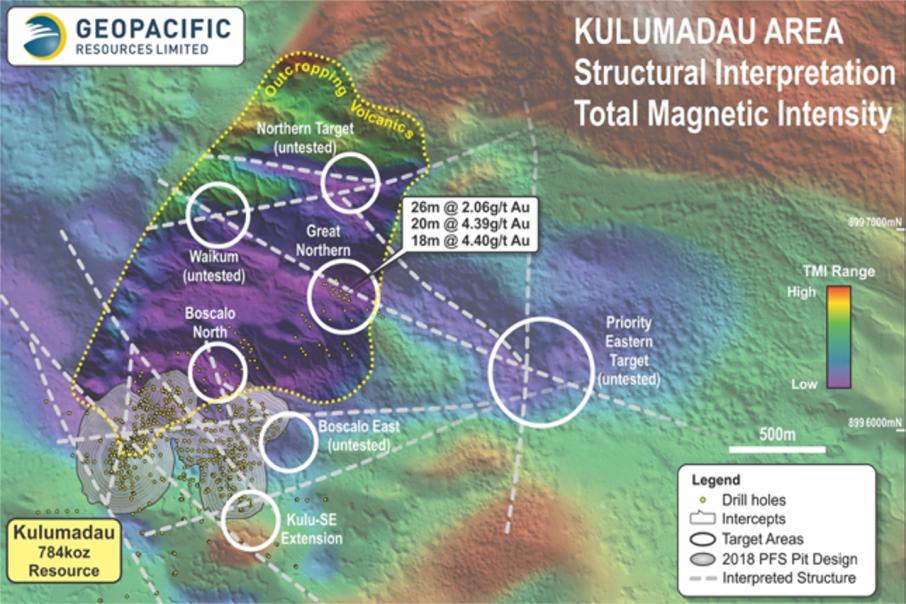 Geopacific Resources has set itself an ambitious exploration target at the Woodlark Gold Project in PNG that already contains 1.57m ounces of gold.

Whilst exploration targets are conceptual in nature and the final outcome is never certain, the new exploration target range represents a lofty goal and provides some insight into management’s confidence in the deposit.

Having just banked $10m from an institutional share placement, the company is hot to trot and looking to advance its current global mineral resource estimate of 47 million tonnes grading 1.04g/t gold.

Geopacific Managing Director Ron Heeks said: “We met expectations with the release of the Pre-Feasibility Study, which supports the development of Woodlark as a robust, stand-alone project capable of delivering over 100,000 ounces per annum over 10 years.  The DFS is moving forward and will further enhance the project economics.”

“The time is now right to commence exploration to show that the larger goldfield will offer more resources.”

“Work has begun at the promising Great Northern area which sits on a structural corridor that’s evident in geophysics, has surface geochemistry and limited drilling that produced results of up to 20m @ 4.39g/t Au.”

“Typically, epithermal orebodies occur in clusters around a central, deeper mineralising source. The mineralisation gets to surface through corridors of weakness caused by faulting in the overlying rocks. Geophysics has allowed us to identify several corridors that are known to be mineralised but have not been fully explored.”

The priority target areas lie between the major Busai deposit and the larger Kulumadau deposit, about 5km to the northwest in a region that remains virtually undrilled due to the presence of masking limestone rocks.

The Great Northern prospect lies near the intersection of major northwest and northeast striking structures, with coincident aeromagnetic lows.

According to the company, the mineralisation at the Great Northern propsect has a very similar geological signature to the nearby Kulumadau ore reserve of 548,000 gold ounces.

Geopacific will also review all historical surface geochemical results covering the sought-after host volcanics and complete systematic reconnaissance and geological mapping to evaluate the gold potential of the Woodlark project.

Additionally, a major program of surface soil sampling, geological mapping and sampling is now underway across more than 600 square kilometres of exploration licences.

According to the company, this will be the first island-wide comprehensive reconnaissance exploration program ever conducted and is likely to provide invaluable data on the entire outcropping geological terrane.

The recent successful $10m placement represents a strong mandate from Geopacific shareholders for the company to embark on its robust exploration program at Woodlark to increase the resource and reserve inventory at the project.