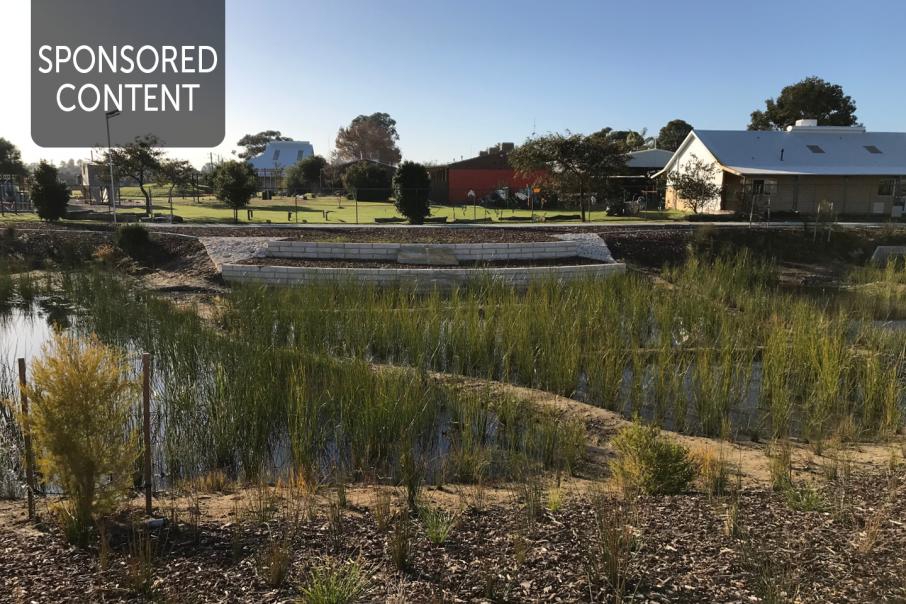 Geographe Civil Pty Ltd prides itself on its relationships with both local government and the local community. Geographe Civil recently completed construction of a new drainage basin at Brockman Park, for the City of Bunbury.  The scope of works was to incorporate a wetlands ecosystem into the finished product.  Existing drainage was removed and modified to enable completion of earthworks, new retaining walls were built with new footpaths and landscaping.

The students from the adjacent Cooinda Primary School were enlisted to assist with the planting of new vegetation.  After works started, it became apparent that the design did not satisfactorily incorporate with the existing drainage infrastructure, slight modifications were made in consultation with the City of Bunbury to create a workable system.  The project started very late in the year and was held up because of rain, the City of Bunbury allowed re-programming and for Geographe Civil to secure the site through the shut-down season.

Further to the Brockman Park works, Geographe Civil and the City of Bunbury recently completed upgrade work to the Horseshoe Lake drainage system in East Bunbury. The existing pump station was demolished and a new state of the art pump station was constructed. A new 450mm diameter pressure main approximately 1km long was constructed to replace the existing 200mm main. This work involved the excavation and installation of the pipeline along Fairway Court, Sandridge Road and Roeger Place and horizontal directional drilling underneath Robertson Drive, to ultimately discharge into the Preston River.

Geographe Civil worked closely with City of Bunbury representatives to ensure both projects ran smoothly. These projects positively impacted the local economy through sourcing most labour, materials and subcontractors from local community businesses.