Gala duo carve their own path

A new refurbishment is keeping things fresh at The Gala Restaurant in Applecross. Adam Orlando reports. 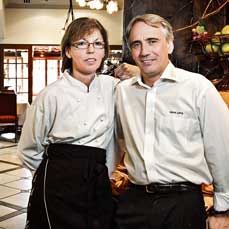 CHEFS Hans Lang and Marianne Kempf took a huge gamble when they bought a popular Italian restaurant Campo De'fiori in 2002 and transformed it into the exclusive German kitchen, The Gala Restaurant.

It's a bold move that has characterised the husband and wife team since they immigrated to Australia in 1985.

After a short stint in Melbourne, the pair returned to Perth in 1986 and accepted positions in the fine dining room at the Burswood Entertainment Complex where they were given "free rein" in the kitchen.

In 2001, after transforming the Windows Restaurant at Burswood into an award-winning ristorante, the pair left to make their own mark, buying Applecross-based Campo De'fiori the following year.

Although Campo was a successful Italian restaurant, Mr Lang knew that he and his wife would have to draw on their heritage if the venture was to succeed.

"We had difficulties with it, we changed the name and back then it was more Italian food, and we didn't want to keep the same name because of if you do people expect the same food," Mr Lang told Gusto.

"So you have to change the name and then people are a little bit more open-minded.

"It doesn't matter what you do, it takes a bit of time to build that reputation so that you are known."

But through patience and virtue, and a refurbishment in January this year which included a new lick of paint, elegant lighting features, an open floor plan and new upholstery on the chairs, The Gala Restaurant has exceeded expectations.

Local artist Michael Summers, who worked on internal decorations for a British hotel chain, worked on the colour-scheme.

Mr Lang says the secret ingredient at Gala is that the restaurant makes everything, from chocolates to ice cream, to bread and butter.

"If you don't do it yourself it could make a difference to someone else," he said.

"Anybody can buy a certain product and open the package, but if you want to be different you should do things yourself.

"When we came to Perth I would say that it was quite difficult to get different things, everything was sort of taken from a formula and I think it really opened up between 1986 and 1995 in terms of the things you could get, the things you were really hanging out for, like fresh ingredients you get in Europe.

"Nowadays [chefs] are underrating the product, the product doesn't get lifted to what it could be.

"I think part of it would be the lack of skills, which probably started fading away when the café scene came in and dining became more casual.

"Everything got scaled down because operational expenses had gone up; things became more pre-packed.

"We do that all ourselves, including sauces, chocolates, we basically do everything."

Mr Lang said while January was not an opportune time to revamp the restaurant, with the downturn in the economy, he believes it is important to make changes on a regular basis.

"In times like these you cannot cut down on the quality of food or buying cheaper things. You have to maintain your standards but there are certain costs you can influence, staffing would be one of them," he said.