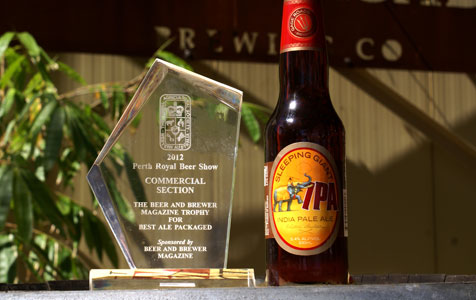 Boutique beer-maker Gage Roads Brewing says an extension to its supply agreement with food and beverage giant Woolworths has it well placed to build on a 72 per cent lift in net profit for the 2013 financial year.

The Palmyra-based brewer said sales of its Gage Roads-branded beers, including standout performers Sleeping Giant IPA and Atomic Pale Ale, were up 35 per cent.

The company the growth reflected the growing consumer trend towards craft beers, with its limited release range, which comprised its Pumpkin Ale, Convict and Abstinence beers, also contributing significantly to the sales rise.

Contract brews, however, were up 103 per cent in comparison to FY2012, driven by strong growth of existing products as well as the launch of new product lines.

Gage Roads contract brews include the Sail & Anchor line, which is distributed and owned by Woolworths, and beers for Matso’s Broome Brewery, San Miguel Yamamura and the Swan Valley’s Duckstein Brewery, among others.

The brewer said it had recently won a new contract with Woolworths to produce a new high volume product to be featured alongside the Sail & Anchor line.

Production of the new line is expected to commence in November.

“Although production growth for Woolworths products slowed in FY2013, the award of this new contract is expected to drive growth in FY2014,” Gage Roads managing director John Hoedemaker said in a statement.

Draught beer production was up 148 per cent on the previous financial year, Gage Roads said.

Mr Hoedemaker said the company was currently undertaking a refresh of its own-branded beers to support further sales growth.

“Emphasising our craft credentials, the refresh will include re-design of packaging for existing products and the creation of a number of new craft core range products,” he said.

“The brand refresh is expected to be completed by the end of October with the re-branded products in stores in time for summer.”

At 12:00PM, WST, Gage Roads shares were up 2.4 per cent to 21 cents, after gaining 10.8 per cent following the profit announcement yesterday.