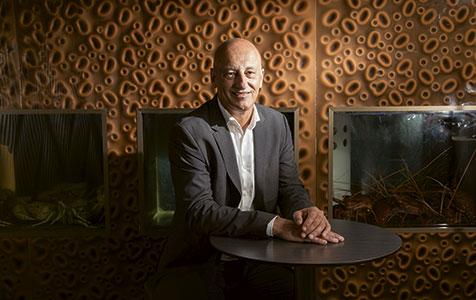 Mr Moskalik said Oceanethix was currently at the commercialisation phase for its logistics technology, best described as an industrial-sized aquarium that can hold high densities of live seafood, from fish to lobsters, as well as molluscs and oysters.

Existing transport methods result in a mortality rate of about 20 per cent, while Oceanethix’s facilities reduce that to about 5 per cent.

The difference between it and existing techniques is that the water in Oceanethix’s aquariums does not need to be discharged.

The technique was developed over the late 1980s to the mid-1990s in Perth by crayfisherman Paul Harrison.

“The process manages the waste, which means it can be put into logistics distributions centres, airports, trucking distribution centres and places where they have no access to fresh seawater,” Mr Moskalik told Business News.

Mr Moskalik said Oceanethix was focused on opening up new markets in inland China, which currently had little to no access to anything other than fresh or frozen seafood products.

He said Oceanethix aimed to replace freezer facilities along the supply chain with its aquarium technology to move live seafood down the same channels.

The company recently signed an agreement with Hong Kong’s Jardines Group, which is seeking to make its air-cargo facility a live seafood transport hub.

“To do that, they need our technology,” Mr Moskalik said.

“What people want to do is move four to five tonnes of live seafood using jet planes, so they can reduce the cost of the shipping.

“The problem of doing that is when that jet lands at the airport, where do you put four or five tonnes of live fish?

“We can help with that efficiency in terms of air shipping.”

Mr Moskalik said the difference in pricing for fresh and frozen seafood compared with the live product was significant, especially for premium products such as lobsters.

“The thing about China is that they are not interested in fresh or frozen, it has to be live seafood,” Mr Moskalik said.

“Frozen lobster tails you can sell for about $US20 a kilogram, but if you get it in there live, wholesale you are looking at $US92 per kg.

“That’s why industry wants to move capacity from fresh and frozen into live.”

Demand from China for live seafood products has grown exponentially in the last 10 years, from around 500,000 tonnes per year in 1999 to just under 2 million tonnes/year in 2008.

“In China, the systems and logistics they have in place to handle the sudden increase in demand for live seafood is just creaking at the edges,” Mr Moskalik said.

“You’ve got big volumes moving through the channels and huge death rates because it’s happened so fast the logistics supply chain has gotten caught short.

“People are trying to move it through old, archaic dirty water systems so you need a pretty high-tech solution to move much bigger volumes.

“The demand is starting to require the solution that we can provide.”

Oceanethix is currently listed on the National Stock Exchange of Australia, but Mr Moskalik said its goal in the next two to three years was to become the first Australian company to make the jump from the NSX to the Hong Kong Stock Exchange.

The company had been pursuing an Australian Securities Exchange listing, but pulled its plans in February 2009 after the onset of the GFC.

Mr Moskalik said about $US8 million had been raised since that time through a series of private equity deals, which was spent on understanding the supply chain and the players involved.

“The reason for the NSX listing is we are now at the commercialisation phase and we’re starting to get revenue, but it’s really a starting point for us,” he said.

“Being a public company already makes it so much easier to get onto the Hong Kong exchange rather than just going cold as a private company.”