Fresh feel at the Charles 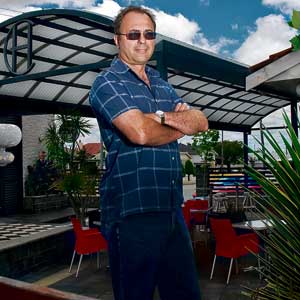 CONNECTION-Chris Angelkov has upgraded the Charles without alienating his locals and without straying from the pub\'s musical past.

But memories are all they'll ever be, because things have definitely changed at the Charles Hotel in North Perth.

This iconic blues bar has had a face-lift. Actually, to be fair, it's also had a tummy-tuck, a shot of botox and a haircut.

And all on a tight budget.

A once-iconic workers' beer barn with a big band room out the back for local and touring musical acts, the Charles is now a modern, classy and sophisticated pub-cum-restaurant-cum-entertainment hub with a clear focus on reinvigorating Perth's live music scene.

Renovations on the front, or public bar, started about four years ago, when the then pool room was removed to make way for an updated bottleshop, which was further enhanced by a canopy and drive-through facility on the Charles Street side.

The focus then shifted to the lounge bar and beer garden, which have been substantially improved during the past couple of years, as has the kitchen, staffed with about 12 chefs on-call from a hospitality agency, serving generous portions and tasty meals.

Work at the Charles has been extensive but the hotel's approved manager, Chris Angelkov, has been mindful of not going overboard.

"I haven't gone the whole hog and made it completely unrecognisable," Mr Angelkov told Gusto.

"I've still got most of my old customers in the front bar, they are still there and still welcome.

"It's not like some renovations where you just clear the front bar and cancel all happy hours and get rid of them, I haven't done that and I didn't want to do that.

"To tell you the truth they've sort of become part of the family and part of the furniture, so that would've been a real drastic step for me, and the venue is big enough to be able to cater to a more sophisticated crowd who demand different things."

And that's been the real motivation for change - becoming more relevant to modern consumers.

"Today's punters are more sophisticated than those in the past; they want to go to a place where there's nice background music, where there's nice tables and chairs, leather couches, an outdoor area that looks nice, plasmas, different beers on tap and different types of entertainment," Mr Angelkov says.

But for all the renovations, costs have been kept to a minimum.

"We did a lot of the work ourselves, like painting and ripping walls down, which made a difference."

And it seems the hard work has paid off for this thrifty operator.

"A driving force has also been to run and work in a place that I'm proud of, and I think I've got there," Mr Angelkov says.

"I've got employees who want to work here, and other people are always applying for jobs here so it has become a desirable place to work, which is valuable."

But the venue's live music pedigree is invaluable.

Headlining acts to grace the stage over the years reads like a who's who of the music world - from Nat King Cole to INXS.

Currently, the Charles features the Perth Jazz Society on Mondays, the Perth Blues Club on Tuesdays, a trivia night on Wednesday and comedy on Thursdays.